A promising multifunctional nanocarrier for opto-acoustic imaging-guided chemotherapy or phtotothermal therapy is presented. 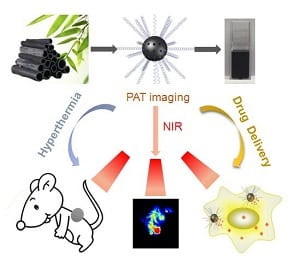 In recent years, light-triggered drug delivery based on near-infrared-mediated photothermal nanocarries has received tremendous attention for the construction of cooperative therapeutic systems in nanomedicine. This kind of drug carriers could on demand release drugs at the desired site due to the high spatial-temporal resolution of near-infrared light stimuli. Most importantly, it is also expected synergistic antitumor efficacy ascribed to the combination of photothermal therapy and chemotherapy. Carbon-based nanomaterials, such as carbon nanotubes, graphene and its derivant have been widely employed for both drug delivery and photothermal therapy due to their large surface area and efficient photothermal conversion efficiency. However, preparation of these man-made carbon nanomaterials usually required a complicated synthetic process. Even worse, toxic catalyst and chemicals are necessary during the reaction, which arouse great concern about its safety and thus limits its medical applications in future. Therefore, the requirement of carbon-materials for medical application have shifted from expensive man-made materials to low cost natural materials with easy synthetic procedures, good biocompatibility, larger surface area, and highly efficient photothermal efficiency to realize enhanced therapeutic outcome and to maximally avoid side effects. 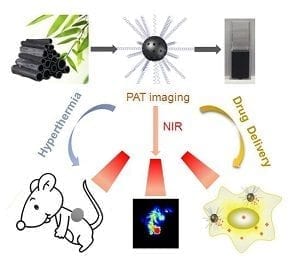 Xinghua Dong and other researchers at the Institute of High Energy Physics in Beijing, China, for the first time, reported a multifunctional drug carrier system based on low cost, natural, and biocompatible carbon material: bamboo charcoal nanoparticles (BCNPs) prepared with an easy synthetic procedure. These BCNPs with porous structure possess not only a large surface area for drug loading but also have an efficient photothermal effect, making them an ideal drug carrier and photothermal agent for cancer therapy. Moreover, after loading doxorubicin (DOX), DOX-BCNPs can enhance drug potency and more importantly overcome the drug resistance of DOX in MCF-7 cancer cells models by significantly increasing cellular uptake while remarkably decreasing efflux of the drug. The in vivo synergistic effect of combining photothermal therapy and chemotherapy in this drug delivery system was also realized. In addition, due to its high NIR optical absorbance, BCNPs could serve as promising opto-acoustic imaging agents to visualize the accumulation of BCNPs in tumors. This research provides a promising multifunctional nanocarrier for opto-acoustic imaging-guided chemotherapy or phtotothermal therapy of tumors and encourages further thorough exploration of BCNPs for biomedical applications.

Does the dusk of “old-school antibiotics” mean the dawn of antimicrobial nanomaterials?
Conserved elements in viral genomes may provide targets for broad-spectrum drugs
Ultrasound therapy improves the memory of Alzheimer's patients
CRISPR-HOT: A new tool to visualize cells