Researchers have demonstrated the potential of a new kind of highly porous MOF to filter out environmental toxins in water. 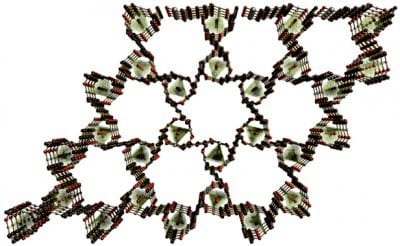 Researchers have demonstrated the potential of a new kind of nanomaterial to filter out environmental toxins in water.

A team of researchers—led by Mainak Majumder and Phillip Sheath from Monash University’s Department of Mechanical Engineering and Matthew Hill from CSIRO—has developed a highly porous metal organic framework (MOF) that, almost uniquely, is stable and able to filter substances in water.

MOFs are clusters of metal atoms connected by organic molecules and known for their exceptional abilities to store or separate gases such as carbon dioxide. This is one of the first studies to demonstrate their separation applications in an aqueous environment.

Majumder says the uniform structure of MOFs made them very efficient filters.

“These are crystalline materials with a difference—they have pores that are all exactly the same size. So while one substance can fit in the pores and be captured, another, just one tenth of a nanometre bigger, can’t fit,” Majumder says.

“As a result you can detect and capture substances that are present in low concentrations, or in a mixture with other materials.”

The researchers demonstrated the filtering ability of the new MOF by sieving paraquat—a herbicide that has been linked with the onset of Parkinson’s Disease. The MOF was a very precise filter, removing paraquat, but leaving other contaminants.

“Because MOFs are flexible, we found that their structure changed when they absorbed the paraquat. This means that our MOF could form the basis of a device for quickly and easily testing for the contaminant in water,” Hill says.

“Due to its very precise filtering properties, this testing application could deliver very accurate contamination readings in the field.”

Only one contaminant, paraquat, was tested in this study; however, the MOF could be altered to filter out other contaminants.