It seems that not all nanoparticles attract a protein corona. 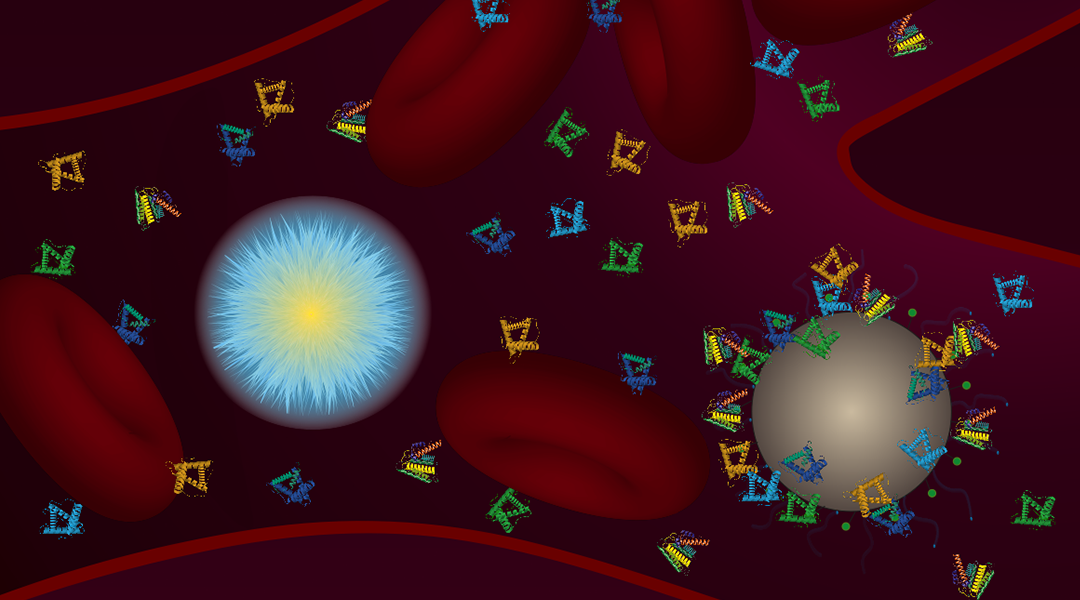 Image featured as a frontispiece in Small issue 18 2020

Long term stability in biological relevant fluids like blood is an essential aspect for most biomedical applications of nanoparticles, and the regularly reported protein corona of nanoparticles plays an important role here. Many reports describe the formation of a protein corona on nanoparticles, along with its influence on the ultimate particle properties. Special attention is often given to the impact of the corona on circulation times in the blood stream.

Centrifugation, a common tool used for the task of nanoparticle isolation, is insufficient for the separation of these type of particles due to their low density. As such, the team demonstrated successful separation via an optimized asymmetrical flow field-flow fractionation setup. This ultimately allowed the separation of polymeric micellar nanoparticles from plasma for the first time, applying minimal shear forces which prevents the desorption of any possible proteins immobilized on the surface of these particles. Combined with liquid chromatography – mass spectrometry traces of enriched proteins could be determined and assigned to a neglectable protein corona.

One member of the team, Dr. Alberg, says “with the newly established method we can determine, if low density nanoparticles are free of adsorbed proteins and quantify traces of proteins selectively enriched. This will help to establish more rational relations between their molecular structure and their in vivo properties.” This is an exciting new setup, which the authors envision as a powerful tool for future studies of low-density nanoparticles like polymeric micelles.

Having found a way to separate these particles from unbound proteins and to analyse the actual amount of bound proteins for the first time, an explanation for the negligible amount of proteins bound to their surface was required. In a recent concept article published in Small, Profs. Richtering, Zentel and co-workers have summarized existing data with the aim to explain the differences in nanoparticles and their influence on the interaction of plasma proteins from a physico-chemical perspective.

The team explain the importance of the internal morphology of the nanocarriers, a fact which is often hidden by just calling them “nanoparticles”. They further explain that the polymeric particles utilized in their study have a hydrophobic core with a dense layer of hydrophilic polymer brushes linked in a stable manner and homogeneously to it on the outside. This hydrophilic shell is the first point of contact for any protein and responsible for blocking  any interaction with the hydrophobic core. The authors describe this behavior as similar to what is described in publications on protein repellent surfaces.

As corona formation modifies the body distribution and may hide targeting units,  preventing the formation of a protein corona altogether may be of benefit to carefully designed nanoparticles. It will be fascinating to see the impact of this work on the field of soft nanoparticles.