A new method of analysis of plasma-chemical energy-transfer processes is demonstrated.

Non-equilibrium gas plasmas are being studied since several decades as potential “tools” for the preparation of thin films and modification of material surfaces, among several other purposes. While widespread applications in different areas have already been established based on low-pressure plasmas, new opportunities are being created by exploring atmospheric-pressure plasmas, promising reduced investment and operating costs as well as opening of new production processes and new application areas such as plasma medicine or the use of plasmas in agriculture.

The researches showed that plasma-chemical energy-transfer processes relevant for film deposition can be analyzed straightforwardly.

Molecular gases used in atmospheric-pressure plasmas are frequently highly diluted in a carrier gas such as argon or helium. In such cases, energetic electrons in the plasma will collide much more frequently with carrier gas atoms than with the molecular components; plasma-chemical reactions of these molecules will therefore to a substantial extent be driven by energy transfer from relatively long-lived excited atoms or molecules (excimers) of the carrier gas. 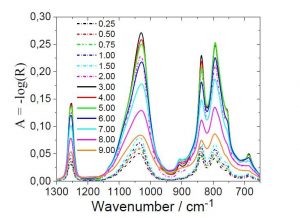 FTIR-ATR spectra taken from a pp-HMDSO film deposited on polypropylene foil from 100 ppm HMDSO in Ar (4 kV, 6 slm) at different positions y indicated in the inserted legend (distances from the leading edge of the plasma zone in cm). Substrate spectra are subtracted.

New research published in Plasma Processes and Polymers was inspired by unexpected results obtained during experimental studies of atmospheric-pressure plasma-assisted thin film deposition from mixtures of precursor molecules with argon, using so-called dielectric barrier discharges, driven by ac voltages with frequencies in the range of 10 to 100 kHz. The authors show that plasma-chemical energy-transfer processes relevant for film deposition can be analyzed straightforwardly by time-averaging the concentrations of long-lived argon species over the duration of half an ac period. Ar species involved are not only atoms in a metastable state, but also resonant atoms and Ar2 excimers are contributing. Results of the analysis can be used to interpret growth rate distributions of thin films.