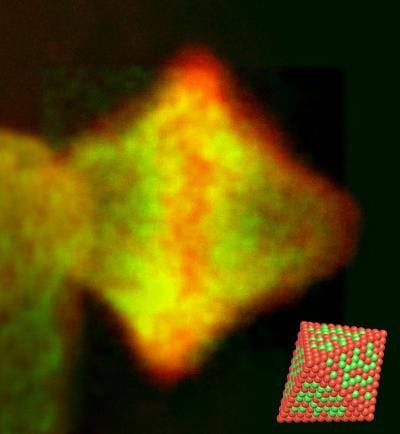 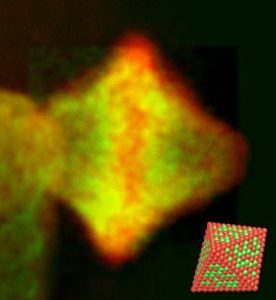 This is an electron micrograph and atomistic model (bottom right) of a highly oxygen-activating platinum-nickel catalyst particle. Its diameter is approximately 10,000 times smaller than the diameter of a human hair. Red spheres represent platinum atoms and green spheres represent nickel atoms. One of the properties of such octahedra is that most surface atoms have the same geometric arrangement. The micrograph was taken at the PICO microscope. Image: Forschungszentrum Jülich/TU Berlin.

Efficient, robust and economic catalyst materials hold the key to achieving a breakthrough in fuel cell technology. Scientists from Jülich and Berlin have developed a material for converting hydrogen and oxygen to water using a tenth of the typical amount of platinum that was previously required. With the aid of state-of-the-art electron microscopy, the researchers discovered that the function of the nanometre-scale catalyst particles is decisively determined by their geometric shape and atomic structure. This discovery opens up new paths for further improving catalysts for energy conversion and storage.

Hydrogen-powered fuel cells are regarded as a clean alternative to conventional combustion engines, as, aside from electric energy, the only substance produced during operation is water. At present, the implementation of hydrogen fuel cells is being hindered by the high material costs of platinum. Large quantities of the expensive noble metal are still required for the electrodes in the fuel cells at which the chemical conversion processes take place. Without the catalytic effect of the platinum, it is not currently possible to achieve the necessary conversion rates.

As catalysis takes place at the surface of the platinum only, material can be saved and, simultaneously, the efficiency of the electrodes improved by using platinum nanoparticles, thus increasing the ratio of platinum surface to material required. Although the tiny particles are around ten thousand times smaller than the diameter of a human hair, the surface area of a kilogram of such particles is equivalent to that of several football fields.

Still more platinum can be saved by mixing it with other, less valuable metals, such as nickel or copper. Scientists from Forschungszentrum Jülich and Technische Universität Berlin have succeeded in developing efficient metallic catalyst particles for converting hydrogen and oxygen to water using only a tenth of the typical amount of platinum that was previously required.

The new catalyst consists not of the round nanoparticles that were previously in widespread use, but of octrahedral-shaped nanoparticles of a platinum-nickel alloy. The researchers discovered that the unique manner in which the platinum and nickel atoms arrange themselves on the surfaces of these particles serves to optimally accelerate the chemical reaction between hydrogen and oxygen to form water. Round or cubic particles, on the other hand, have different atomic arrangements at the surface and are therefore less effective catalysts for the chemical reaction, something which would have to be compensated by using increased amounts of noble metal.

The way in which the life-cycle of the catalysts depends on and can be optimized by their atomic composition was the subject of the research team’s investigation, which made use of ultrahigh-resolution electron microscopy at the Ernst Ruska-Centre (ER-C), a facility of the Jülich Aachen Research Alliance. “A decisive factor for understanding the life-cycle of the catalysts was the observation that nickel and platinum atoms prefer not to be evenly distributed at the surface of the nano-octahedra,” explains Dr. Marc Heggen from ER-C and the Peter Grünberg Institute at Forschungszentrum Jülich. “Although this is advantageous for reactivity, it limits lifetime.”

To identify the location of each element with atomic precision, the researchers used a method in which the electron beam of one of the world’s leading ultrahigh-resolution electron microscopes is finely focused, sent through the specimen and, by interactions with the specimen, loses part of its energy. Each element in the specimen can thus be identified like a fingerprint. Conventional electron microscopes are not capable of detecting such chemical signatures with atomic resolution.

“This pioneering experimental work provides direct evidence for the fact that the choice of the correct geometric shape for the catalyst particles is as important for optimizing their function as the choice of their composition and size,” says Prof. Peter Strasser from Technische Universität Berlin. “This provides researchers with new possibilities for further improving functional materials, especially catalysts, for energy storage.” The latest experiments from Strasser’s research group indicate that substantial increases in efficiency may also be possible for the reaction splitting water to produce oxygen in electrolysers, for which the even more expensive noble metal iridium is used.