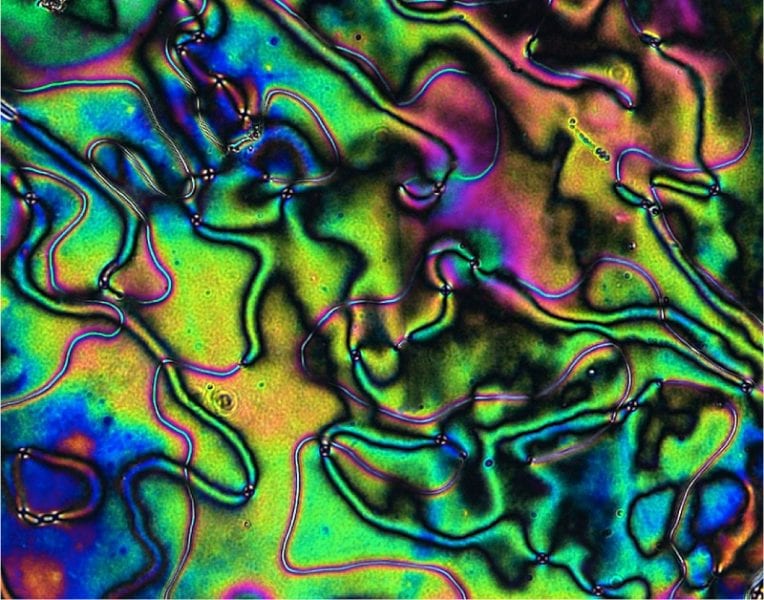 A liquid crystal sample like this one, seen under a microscope, gets tougher when repeatedly compressed, according to research at Rice University. Image: Verduzco Laboratory/Rice University.

Squeeze a piece of silicone and it quickly returns to its original shape, as squishy as ever. But scientists at Rice University have discovered that the liquid crystal phase of silicone becomes 90 percent stiffer when silicone is gently and repeatedly compressed. Their research could lead to new strategies for self-healing materials or biocompatible materials that mimic human tissues.

Silicone in its liquid crystal phase is somewhere between a solid and liquid state, which makes it very handy for many things. So Rice polymer scientist Rafael Verduzco was intrigued to see a material he thought he knew well perform in a way he didn’t expect. “I was really surprised to find out, when my student did these measurements, that it became stiffer,” he said. “In fact, I didn’t believe him at first.”

The researchers had intended to quantify results seen a few years ago by former Rice graduate student Brent Carey, who subjected a nanotube-infused polymer to a process called repetitive dynamic compression. An astounding 3.5 million compressions (five per second) over a week toughened the material, just like muscles after a workout, by 12 percent. What Verduzco and lead author/Rice graduate student Aditya Agrawal came across was a material that shows an even stronger effect. They had originally planned to study liquid crystal silicone/nanotube composites similar to what Carey tested, but decided to look at liquid crystal silicones without the nanotubes first. “It’s always better to start simple,” Verduzco said.

Silicones are made of long, flexible chains that are entangled and knotted together like a bowl of spaghetti. In conventional silicones the chains are randomly oriented, but the group studied a special type of silicone known as a liquid crystal elastomer. In these materials, the chains organize themselves into rod-shaped coils. When the material was compressed statically, like squeezing a piece of Jell-O or stretching a rubber band, it snapped right back into its original shape. The entanglements and knots between chains prevent it from changing shape. But when dynamically compressed for 16 hours, the silicone held its new shape for weeks and, surprisingly, was much stiffer than the original material.

“The molecules in a liquid crystal elastomer are like rods that want to point in a particular direction,” Verduzco said. “In the starting sample, the rods are randomly oriented, but when the material is deformed, they rotate and eventually end up pointing in the same direction. This is what gives rise to the stiffening. It’s surprising that by a relatively gentle but repetitive compression, you can work out all the entanglements and knots to end up with a sample where all the polymer rods are aligned.”

Before testing, the researchers chemically attached liquid crystal molecules – similar to those used in LCD displays — to the silicones. While they couldn’t see the rods, X-ray diffraction images showed that the side groups – and thus the rods – had aligned under compression. “They’re always coupled. If the side group orients in one direction, the polymer chain wants to follow it. Or vice versa,” Verduzco said.

The X-rays also showed that samples heated to 70 degrees Celsius slipped out of the liquid crystal phase and did not stiffen, Verduzco said. The stiffening effect is reversible, he said, as heating and cooling a stiffened sample will allow it to relax back into its original state within hours.

Verduzco plans to compress silicones in another phase, called smectic, in which the polymer rods align in layers. “People have been wanting to use these in displays, but they’re very hard to align. A repetitive compression may be a simple way to get around this challenge,” he said.

Since silicones are biocompatible, they can also be used for tissue engineering. Soft tissues in the body like cartilage need to maintain strength under repeated compression and deformation, and liquid crystal elastomers exhibit similar durability, he said.

Motion capture in clinics: From Hollywood to healthcare
Preclinical studies demonstrate new ways to stop bleeding
New antibiotic for deadly superbug could save tens of thousands of lives
Insights into heart development with 3D bioprinting