New Insight into an Intriguing State of Magnetism

Scientists from Berkeley and TU Munich investigate magnons in a material that becomes helimagnetic below about 30 kelvin: iron silicide doped with cobalt. 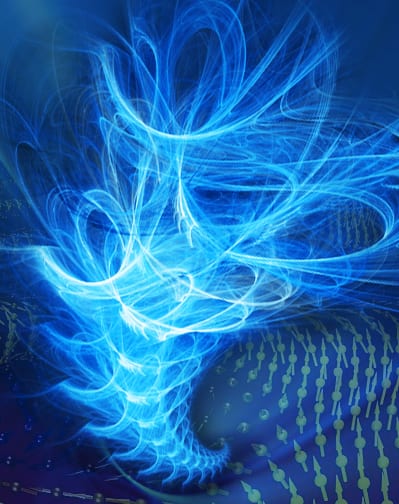 An impressionistic rendition of helimagnetism, which can arise if a material’s crystal structure forces the spins of itinerant electrons to precess collectively.

Magnonics is an exciting extension of spintronics, promising novel ways of computing and storing magnetic data. What determines a material’s magnetic state is how electron spins are arranged (not everyday spin, but quantized angular momentum). If most of the spins point in the same direction, the material is ferromagnetic, like a refrigerator magnet. If half the spins point one way and half the opposite, the material is antiferromagnetic, with no everyday magnetism.

There are other kinds of magnetism. In materials where the electrons are “itinerant” – moving rapidly through the crystal lattice like a gas, so that their spins become strongly coupled to their motions – certain crystalline structures can cause the spins to precess collectively to the right or left in a helix, producing a state called helimagnetism.

Helimagnetism most often occurs at low temperature; increasing the heat collectively excites the spin structure and eventually destroys the order, relaxing the magnetism. In quantum calculations, such collective excitations are treated like particles (“quasiparticles”); excitations that disrupt magnetism are called magnons, or spin waves. There is a well developed theory of helimagnons, yet little is known experimentally about how helimagnetism forms or relaxes on time scales of less than a trillionth of a second, the scale on which magnetic interactions actually occur.

A team of scientists from Berkeley Lab’s Materials Sciences Division, UC Berkeley’s Department of Physics, and the Technical University of Munich, led by Jake Koralek and Dennis Meier, has studied magnons in a material that becomes helimagnetic below about 30 kelvin: iron silicide doped with cobalt. They investigated how helimagnons evolve as the temperature increases, destroying the magnetic order, as well as how the magnetic phases are affected by an external magnetic field.

Working in Joseph Orenstein’s laboratory, the team used an ultrashort laser pulse to excite the cobalt-doped iron silicide crystal, then followed up with another laser pulse within quadrillonths of a second. This allowed them to measure how much the helical oscillations had relaxed and how the spin states evolved. The pump-probe experiments were performed over a range of temperatures at various external magnetic field strengths.

The pump pulses created spin waves, or helimagnons, which weakened the magnetic order. Because they were able to resolve the helimagnons at ultrashort time resolution, the researchers discovered striking versatility in spin relaxation according to the electrons’ collective organization. They were able to reveal the underlying spin dynamics of a model itinerant magnet system, opening the way to fruitful research programs in the burgeoning field of magnonics.

Other, related research on this subject can be found here and here.