A new study in Advanced Science presents the development of a new nanocomposite material electrocatalyst for more efficient hydrogen production. 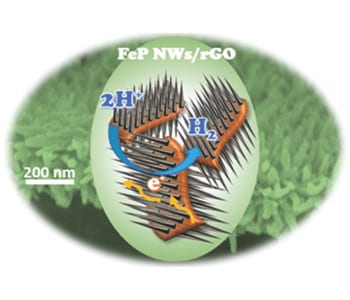 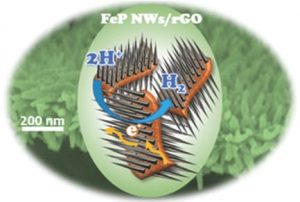 The development of new, clean, and efficient energy carriers is a key scientific concern, and hydrogen is a particularly promising candidate. A new study in Advanced Science from scientists based in Singapore and the UK presents the development of a new electrocatalyst for more efficient hydrogen production. The new electrocatalyst developed by Yan and coworkers consists of a well-ordered nanocomposite material of iron phosphide nanowires grown on 2D reduced graphene oxide. The new composite material exhibited the highest mass activity and current density when compared to other iron phosphide catalysts.

Hydrogen can be utilized as an energy carrier due to its high energy density, however in order for this to be utilized hydrogen must first be produced. Currently the majority of hydrogen production is achieved through steam-methane reforming, which produces carbon dioxide and therefore contributes to global warming. An attractive alternative is hydrogen production through electrolysis; running electricity through water to separate out the hydrogen and oxygen atoms. To make this process viable, low cost and efficient electrocatalysts need to be developed. Transition metal phosphides are being currently investigated for this use as they are able to operate efficiently over a wide range of pH levels, with this study focused on iron phosphide.

The new composite electrocatalyst material is produced by growing porous FeP nanowire arrays vertically on 2D reduced graphene oxide, in order to generate a 3D hierarchical nanocomposite. The success of the new material is attributed to improved electrode/electrolyte interactions and efficient catalyst use due to the the porous, 3D hierarchical architecture, and the direct integration of the iron phosphide onto the graphene oxide sheets. This study represents a new method for constructing nanocomposites and a new potential electrocatalyst material.