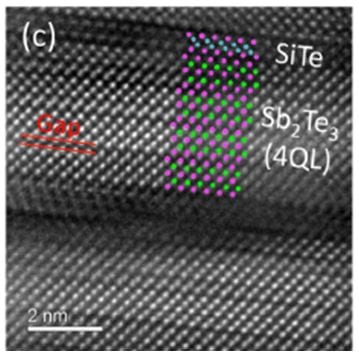 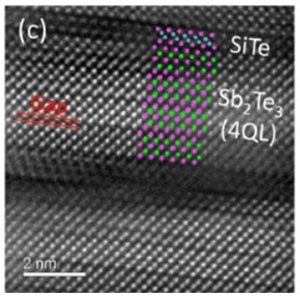 Low production cost and excellent device scalability are two of the reasons why “phase-change materials”, such as the ones based on germanium, antimony and tellurium (Ge2Sb2Te5, also known as GST), may become the materials foundation of next generation non-volatile memory devices. When exposed to electrical or optical pulses these compounds reversibly switch between crystalline and amorphous state, however, in conventional cells this process requires a significant amount of Joule heating that is then lost.

In a recent Rapid Research Letter appearing in physica status solidi (RRL), Yuta Saito and coworkers report the synthesis and characterization of novel (SiTe)2(Sb2Te3)n superlattice structures. Using first-principles simulations based on density functional theory the authors confirm the stability of this material and find evidence for its nontrivial topological properties. Subsequently, the researchers use magnetron sputtering to produce samples and investigate the lattice structure as well as formation of oriented superlattices via X-ray diffraction and transmission electron microscopy, respectively. Based on their insightful combination of modern computational and experimental techniques, the authors conclude that this material system may be promising as “interfacial phase-change material” that reduces wasting of heat and, in addition, spin manipulation may be possible due to interesting electronic properties.