Nanopores have potential for disease detection

Chambers can be used for the detection and identification of a wide range of molecules, including DNA. 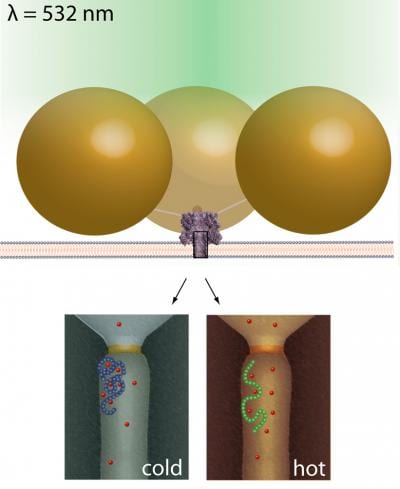 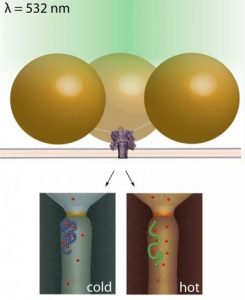 By tethering gold nanoparticles (large spheres in top image) to the nanopore (violet), the temperature around the nanopore can be changed quickly and precisely with laser light, allowing scientists to distinguish between similar molecules in the pore that behave differently under varied temperature conditions. Image: Robertson/NIST.

Tiny biomolecular chambers called nanopores that can be selectively heated may help doctors diagnose disease more effectively if recent research by a team at the National Institute of Standards and Technology (NIST), Wheaton College, and Virginia Commonwealth University (VCU) proves effective. Though the findings may be years away from application in the clinic, they may one day improve doctors’ ability to search the bloodstream quickly for indicators of disease—a longstanding goal of medical research.

The team has pioneered work on the use of nanopores—tiny chambers that mimic the ion channels in the membranes of cells—for the detection and identification of a wide range of molecules, including DNA. Ion channels are the gateways by which the cell admits and expels materials like proteins, ions and nucleic acids. The typical ion channel is so small that only one molecule can fit inside at a time.

Previously, team members inserted a nanopore into an artificial cell membrane, which they placed between two electrodes. With this setup, they could drive individual molecules into the nanopore and trap them there for a few milliseconds, enough to explore some of their physical characteristics.

“A single molecule creates a marked change in current that flows through the pore, which allows us to measure the molecule’s mass and electrical charge with high accuracy,” says Joseph Reiner, a physicist at VCU who previously worked at NIST. “This enables discrimination between different molecules at high resolution. But for real-world medical work, doctors and clinicians will need even more advanced measurement capability.”

A goal of the team’s work is to differentiate among not just several types of molecules, but among the many thousands of different proteins and other biomarkers in our bloodstream. For example, changes in protein levels can indicate the onset of disease, but with so many similar molecules in the mix, it is important not to mistake one for another. So the team expanded their measurement capability by attaching gold nanoparticles to engineered nanopores, “which provides another means to discriminate between various molecular species via temperature control,” Reiner says.

The team attached gold nanoparticles to the nanopore via tethers made from complementary DNA strands. Gold’s ability to absorb light and quickly convert its energy to heat that conducts into the adjacent solution allows the team to alter the temperature of the nanopore with a laser at will, dynamically changing the way individual molecules interact with it.

“Historically, sudden temperature changes were used to determine the rates of chemical reactions that were previously inaccessible to measurement,” says NIST biophysicist John Kasianowicz. “The ability to rapidly change temperatures in volumes commensurate with the size of single molecules will permit the separation of subtly different species. This will not only aid the detection and identification of biomarkers, it will also help develop a deeper understanding of thermodynamic and kinetic processes in single molecules.”