A transmission-reflection-integrated multifunctional coding metasurface is proposed, which can control the transmitted and reflected wavefronts simultaneously on both sides of the metasurface interface.

Metamaterials have received great attention due to their powerful capabilities to control electromagnetic (EM) waves. Metasurfaces, as the two-dimensional versions of metamaterials, have also attracted research interest owing to their simple fabrication, negligible electrical thickness, and lower insertion losses.

In 2014, the concept of digital coding metasurfaces was originally put forward by Prof. Tiejun Cui’s Group at Southeast University, by designing two distinct coding elements with opposite reflection phases (e.g. 0° and 180°) as the digital bits “0” and “1”. Coding metasurfaces have advantages in simplifying the design and optimization procedures owing to the digitalization of meta-atoms. Importantly, the coding metasurfaces build up a bridge between the physical and digital worlds, making it possible to revisit metamaterials from the perspective of information science and be combined with algorithms and methods in digital signal processing. 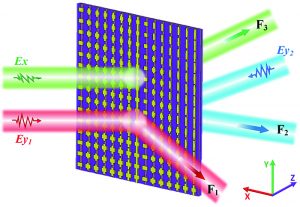 Prof. Tie Jun Cui and co-workers propose a transmission-reflection-integrated (TRI) multifunctional coding metasurface with the multilayered structure. The TRI coding metasurface composed by anisotropic and asymmetric meta-atoms works in both transmitted and reflected modes by changing the polarization and direction of incident EM waves. It is the first time to realize three different functions by using a single passive metasurface, and simultaneously control not only the transmitted wavefronts but also reflected wavefronts on both sides of the metasurface interface.

As a proof of concept, beam deflection, diffuse scattering, and vortex beam generation are experimentally realized in the microwave frequency. The designs have potential applications in base-station antennas, high-efficiency meta-lens, polarization beam splitters, and antenna radomes. The TRI coding metasurface can be further developed for holograms, which could produce different images in the transmission and reflection modes. In the future, the TRI design could be combined with the digital coding strategy to reach active full-space controls of EM waves.