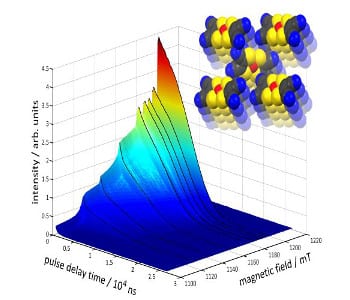 From more efficient database queries to the cracking of today’s reliable cryptographic systems: The development of a competitive quantum computer would mark the beginning of a new digital era. So far research is focused on finding suitable processing units, the so-called quantum bits (qubits). In contrast to classical bits, they cannot only be in the states 0 and 1, but also in an arbitrary superposition of those two states. A prerequisite for useful computations is a long coherence time (life time) of the superposition states. Prof. Joris van Slageren´s research group at the Institute of Physical Chemistry, University of Stuttgart recently published results on a coordination compound with exceptionally long coherence times over an unusually wide temperature ran 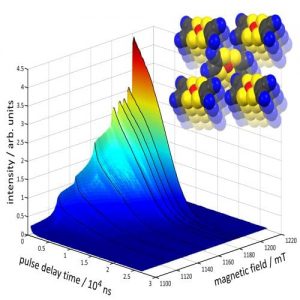 Recently, many different systems have been proposed for the physical implementation of a quantum bit. Very promising proposals utilize the electron spin in magnetic molecules. Of these, coordination compounds consisting of a metal ion with organic groups (ligands) offer the advantage of the realization of tailor-made physical properties via convenient chemical manipulations.

A well-known limiting factor for the life time of the superposition state is the presence of adjacent nuclear spins, as they generate stray fields. Based on this knowledge the Van Slageren group identified a compound containing very few nuclear spins in vicinity of the electron spin as potential candidate for showing long coherence times. The compound consists of a central copper ion incorporated in an organic shell with only few nuclear spin carrying elements. Additionally, the ligand shell is very flat and rigid which enables the compound to form stable columns in the solid state.

The measurements of Van Slageren´s research group proved that these design-criteria indeed enable exceptionally long coherence times. At low temperatures (7 Kelvin) a coherence time of 68 microseconds was observed. This substantially exceeds previous reported values for molecular compounds, which were around a few microseconds.

Astonishingly, the Stuttgart researchers were able to detect coherence over an unusually wide temperature range. So far molecular qubits only showed coherence at very low temperatures, whereas the introduced compound´s coherence is room-temperature stable. With this property, the realization of energy efficient quantum computers with low operating expenses moves closer.