The NPE plastics industry exhibition in Orlando shows that despite high oil prices, plastics are becoming ever more widespread, as lightweight polymeric materials in cars, trucks and planes help to save fuel. 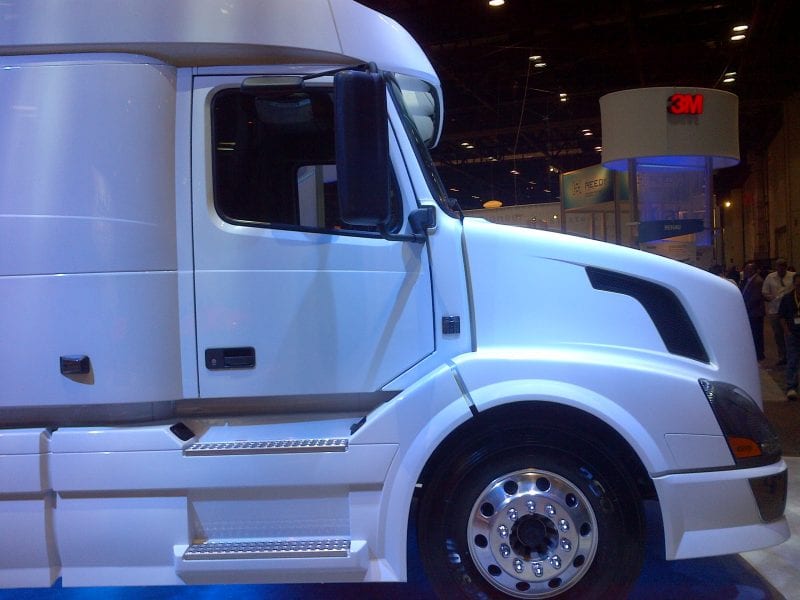 Plastics are becoming more pervasive as materials, despite high oil prices, because of all the advantages they bring in terms of low weight and ease of processing, for example compared to metals, even lightweight ones like Aluminum. At least that was the verdict from industry and researchers at the National Plastics Exhibition (NPE) and the ANTEC meeting (the annual technical conference of the Society of Plastics Engineers), jointly held in Orlando from the 2nd through the 5th of April 2012.

Aside from the oversized assembly lines  directly lifted from the factory floor and remounted piece by piece at the show by some of the exhibitors, one item that was the talk of the town was the large semi  truck tractor at the SABIC (Saudi Arabia Basic Industries Corporation) stand. The truck, from Volvo, had a large percentage of its external structures made of plastics instead of sheet metal, affording fuel savings of 20% over a conventional truck, due to less weight. This in turn would decrease the total cost of ownership of the product, despite a somewhat higher initial purchase cost. More specifically, most of the truck outer panels were made of injection-molded polycarbonate/acrylonitrile-butadiene-styrene (called Cycoloy) resin reinforced with glass fibers, whereas the headlight covers were made of another polycarbonate thermoplastic resin (Lexan), and the brackets of the side air deflection system included polybutylene terephthalate from recycled water bottles. The glass fiber reinforcement is crucial for the truck to meet crash test standards. Sabic also announced the opening of two new research centers in China and India, to be operational by mid-2013, for the development of thermoplastics and petrochemicals-derived materials.

Bioplastics were also featured at the exhibition, with a large stand from Braskem, which was touting its sugar-cane derived polyethylene, as well as several other companies, some of which presented composites with renewable fibers for interior use, to minimize the typical problem of bioplastics: moisture absorption.

ANTEC, aside from the many technical talks on processing, composites, and plastic medical devices, also featured a seminar on the “reshoring initiative”, an effort by the US government and several business groups to bring back to the United States manufacturing which had previously been offshored to countries with lower labor costs. The panelists emphasized the high impact of the “hidden” costs of offshoring. Many success stories were shared with the audience, the highlight being the Calibowl company, a manufacturer of specialty plastic bowls, which brought back its production to California, from China, saving money in the end, and now exports its products to the rest of the world.