Researchers have engineered a protein biomaterial to generate mimics of human skeletal muscle to study the effect of injury and disease on this tissue. 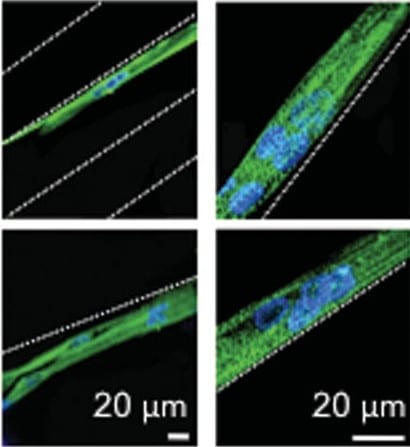 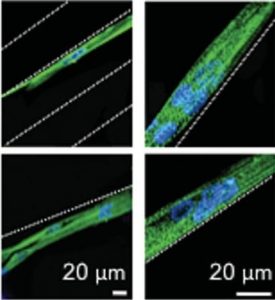 Skeletal muscles, as the name suggest, are mostly attached to our bones and can be controlled voluntary by our brain. Unfortunately, injury, trauma, or certain diseases can cause us to lose our skeletal muscle function. To quantitatively study the progression of such injuries or diseases, scientists need models of human skeletal muscle tissue that can be studied outside the living body (in vitro). Such model tissue may also be a source for therapies using regenerative medicine.

In the past, scientists mostly used mice muscle cells to study muscle-cell biology. Although this greatly contributed to our knowledge of muscle cells today, few studies have been carried out on muscle cells derived from the human body.

Now, Prof. Heilshorn and her colleagues at Stanford University, USA, have engineered a protein biomaterial to generate mimics of human skeletal muscle. The new biomaterial promotes the alignment and fusion of primary human myoblasts (those are the clinically most relevant muscle-cell precursors) into mature muscle cells (myotubes). The special design of the biomaterial allowed studies on the influence of surface topography and cell-adhesion ligand density on the muscle-cell fusion – two properties that have previously shown importance in experiments on cells derived from mice.

The scientists demonstrate that it is possible to control the architecture of the human myotubes grown on their biomaterial: length, width, and nuclear index could be modified through engineering of biomaterial substrate cues. Furthermore, a direct comparison showed that myoblast–matrix interactions of the human cells were not effectively modeled by the commonly used mouse-derived cells (C2C12 cell line), highlighting the importance of studies on cells isolated from human biopsies.

This novel, in vitro human skeletal muscle-tissue model will certainly be useful to further study human myotube differentiation, maturation, and function in the future. The special design of the cell–biomaterial system provides a model well suited to study, for example, the impact of biomaterial cues on the ability of skeletal muscles to contract and generate force. The next step, of course, would be tissue engineering: the new biodegradable and biocompatible material may be used to develop and grow muscle fibers outside the human body that are tailored for specific applications. Such studies will be the foundation for applications in future regenerative medicine, aimed at replacing aged, injured, or diseased skeletal muscle tissue.

Treating tracheal defects using flexible polymeric biomaterials
Energy generated in the blink of an eye
Closing in on an HIV vaccine using rare antibodies
Could Beer Waste Power Your Home?