The fraction of dead chains can be predicted, allowing the polymer reaction system to be tuned to produce the desired percentage of live chains. 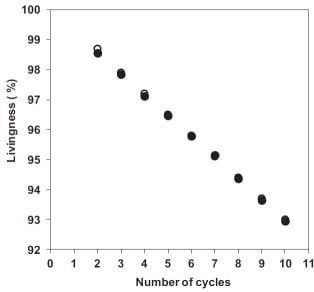 A collaboration between researchers in Australia and the UK has investigated the synthesis of high-order multiblock copolymers. Specifically, a one-pot sequential monomer addition RAFT

polymerization system was selected for the production of ten blocks of N,N-dimethyl acrylamide, with the average degree of polymerization being ten for each block.

This multiblock homopolymer system has been investigated experimentally in previous studies. Using this well-defined system, models and simulations were conducted using the PREDICI software package, confirming that degenerative transfer (in particular, RAFT polymerization) is ideal for high-order multiblock copolymer synthesis.  Each step proceeds almost completely, without the need for any intermediate purification steps: despite requiring ten full iterative RAFT polymerization steps to reach the desired high-order multiblock copolymer product, at the end of the ten cycles the portion of dead chains was discovered to be only 7%.

These researchers realised that the number fraction of dead chains could be predicted based on the number of chains generated from the initiator. This means that this reaction system can now be tuned to provide a desired percentage of live chains – a key outcome for the applicability of any reaction system.

This article is part of the special Best of Macros 2014 issue, and is now free to read at http://www.best-of-macros.de!