Rate of improvement of quantum dot devices is one of the most rapid seen for a solar technology. 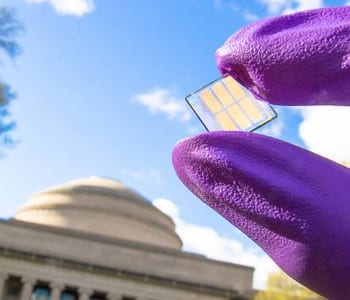 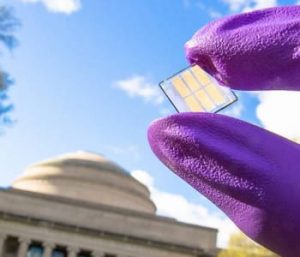 Researcher displays a sample of the record-setting new solar cell on the MIT campus. Photo courtesy of Chia-Hao Chuang.

Solar-cell technology has advanced rapidly, as hundreds of groups around the world pursue more than two dozen approaches using different materials, technologies, and approaches to improve efficiency and reduce costs. Now a team at MIT has set a new record for the most efficient quantum-dot cells — a type of solar cell that is seen as especially promising because of its inherently low cost, versatility, and light weight.

While the overall efficiency of this cell is still low compared to other types — about 9 percent of the energy of sunlight is converted to electricity — the rate of improvement of this technology is one of the most rapid seen for a solar technology. The development is described in a paper, published in the journal Nature Materials, by MIT professors Moungi Bawendi and Vladimir Bulović and graduate students Chia-Hao Chuang and Patrick Brown.

The new process is an extension of work by Bawendi, the Lester Wolfe Professor of Chemistry, to produce quantum dots with precisely controllable characteristics — and as uniform thin coatings that can be applied to other materials. These minuscule particles are very effective at turning light into electricity, and vice versa. Since the first progress toward the use of quantum dots to make solar cells, Bawendi says, “The community, in the last few years, has started to understand better how these cells operate, and what the limitations are.”

The new work represents a significant leap in overcoming those limitations, increasing the current flow in the cells and thus boosting their overall efficiency in converting sunlight into electricity.

Many approaches to creating low-cost, large-area flexible and lightweight solar cells suffer from serious limitations — such as short operating lifetimes when exposed to air, or the need for high temperatures and vacuum chambers during production. By contrast, the new process does not require an inert atmosphere or high temperatures to grow the active device layers, and the resulting cells show no degradation after more than five months of storage in air.

Bulović, the Fariborz Maseeh Professor of Emerging Technology and associate dean for innovation in MIT’s School of Engineering, explains that thin coatings of quantum dots “allow them to do what they do as individuals — to absorb light very well — but also work as a group, to transport charges.” This allows those charges to be collected at the edge of the film, where they can be harnessed to provide an electric current.

The new work brings together developments from several fields to push the technology to unprecedented efficiency for a quantum-dot based system: The paper’s four co-authors come from MIT’s departments of physics, chemistry, materials science and engineering, and electrical engineering and computer science. The solar cell produced by the team has now been added to the National Renewable Energy Laboratories’ listing of record-high efficiencies for each kind of solar-cell technology.

The overall efficiency of the cell is still lower than for most other types of solar cells. But Bulović points out, “Silicon had six decades to get where it is today, and even silicon hasn’t reached the theoretical limit yet. You can’t hope to have an entirely new technology beat an incumbent in just four years of development.” And the new technology has important advantages, notably a manufacturing process that is far less energy-intensive than other types.

Chuang adds, “Every part of the cell, except the electrodes for now, can be deposited at room temperature, in air, out of solution. It’s really unprecedented.”

The system is so new that it also has potential as a tool for basic research. “There’s a lot to learn about why it is so stable. There’s a lot more to be done, to use it as a testbed for physics, to see why the results are sometimes better than we expect,” Bulović says.

A companion paper, written by three members of the same team along with MIT’s Jeffrey Grossman, the Carl Richard Soderberg Associate Professor of Power Engineering, and three others, appears this month in the journal ACS Nano, explaining in greater detail the science behind the strategy employed to reach this efficiency breakthrough.

The new work represents a turnaround for Bawendi, who had spent much of his career working with quantum dots. “I was somewhat of a skeptic four years ago,” he says. But his team’s research since then has clearly demonstrated quantum dots’ potential in solar cells, he adds.

Arthur Nozik, a research professor in chemistry at the University of Colorado who was not involved in this research, says, “This result represents a significant advance for the applications of quantum-dot films and the technology of low-temperature, solution-processed, quantum-dot photovoltaic cells. … There is still a long way to go before quantum-dot solar cells are commercially viable, but this latest development is a nice step toward this ultimate goal.”