MIT microchip survives radiation of a trip to Mars

DNA-sequencing microchip functions after exposure to radiation doses similar to those that might be expected during a robotic expedition to Mars. 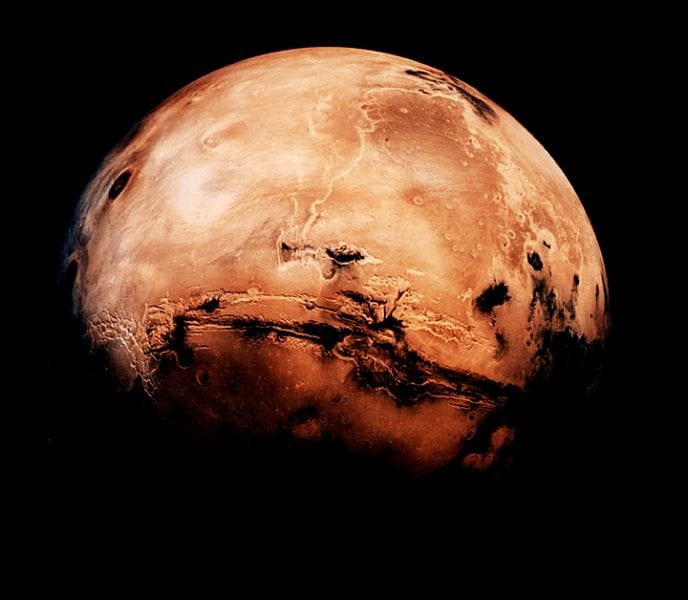 If there is life on Mars, it’s not too farfetched to believe that such Martian species may share genetic roots with life on Earth.

More than 3.5 billion years ago, a blitz of meteors ricocheted around the solar system, passing material between the two fledgling planets. This galactic game of pingpong may have left bits of Earth on Mars, and vice versa, creating a shared genetic ancestry between the two planets.

Such a theory holds great appeal for Christopher Carr, a research scientist in MIT’s Department of Earth, Atmospheric and Planetary Sciences. Working with Gary Ruvkun at Massachusetts General Hospital (MGH) and Maria Zuber, the E.A. Griswold Professor of Geophysics and MIT’s vice president for research, Carr is building a DNA sequencer that he hopes will one day be sent to Mars, where it can analyze soil and ice samples for traces of DNA and other genetic material.

Now in a step toward that goal, Carr and colleagues at MIT, Harvard University and MGH have exposed the heart of their tool — a DNA-sequencing microchip — to radiation doses similar to those that might be expected during a robotic expedition to Mars. After exposure to such radiation — including protons and heavy ions of oxygen and iron — the microchip analyzed a test strain of E. coli, successfully identifying its genetic sequence.

Carr says the group’s results show the microchip can survive up to two years in space — long enough to reach Mars and gather data there for a year and a half.

“Over time on Mars, a chip’s performance could degrade, reducing our ability to get sequence data. The chip might have a higher error rate, or could fail to function at all,” Carr says. “We did not see any of these issues [in our tests]. … Once this chip has been through two years of a Mars mission, it still will be able to sequence.”

The researchers reported their results in a paper published in the journal Astrobiology.

Any life on Mars, past or present, would have to be extremely resilient: The planet’s atmosphere, made mostly of carbon dioxide, is 100 times thinner than Earth’s, providing very little warmth. Temperatures can plummet to minus 195 degrees Fahrenheit.

On the other hand, the deep subsurface of Mars is not much different from that of Earth, which is known to harbor microbes. Results from the Curiosity rover, currently exploring Mars, suggest that beneath the planet’s surface lies a dry and cold — but otherwise likely benign — environment, with all the major elements required for life.

To detect such subterranean life, a DNA-sequencing instrument on the surface of Mars would have to withstand temperature swings and steady exposure to space radiation. Such exposure could cause chips to report false positives, for instance, or to record extra bases in DNA sequences.

Carr and his colleagues tested the effects of Mars-like radiation on a commercially available sequencing chip. The tested chip contains 1.3 million microwells, each of which can hold a single bead containing an amplified fragment of DNA that can be used to generate a DNA sequence.

To test the chip’s resilience to radiation, the team traveled to NASA’s Space Radiation Laboratory at Brookhaven National Laboratory. Once there, the researchers, working with a total of 40 microchips, first performed electrical testing on 20 chips — a process by which a chip’s gain, voltage and wells are calibrated to verify that the parts are working properly.

Following electrical testing, Carr exposed the chips to various levels of radiation, using a linear accelerator and an electron-beam ion source. The highest radiation dose sustained by the chips was more than they would experience during a two-year mission to Mars.

After the chips were irradiated, the team once again tested the electrical performance of each, and found very little change in the chips’ functioning.

Life on Mars and beyond

In a second round of testing, Carr exposed the remaining 20 microchips to the same radiation levels as the first batch, then took the chips back to his lab and loaded each with DNA fragments from E. coli. Despite their exposure to radiation, the chips were able to analyze DNA and correctly identified the bacterial sequences.

“These chips are great candidates to do sequencing on Mars without any modifications that we know of right now,” Carr says. “We essentially see no impact from radiation. That was a critical thing for us to show.”

Chris McKay, a planetary scientist with the Space Science Division of NASA’s Ames Research Center, says a radiation-resilient DNA-sequencing chip, such as the one used in this experiment, is a promising candidate for future life-detecting missions to Mars and other planets.

The paper by Carr and colleagues “reports on an important step forward on the development of DNA sequencers for planetary missions,” says McKay, who did not contribute to the research. “In addition to being part of the search for life on other worlds, the DNA searcher would be relevant to assessing sites for human exploration.”

In previous studies, Carr and his colleagues have found that the reagents used in DNA sequencing can also withstand similar radiation levels. Taken together, Carr says, the results suggest genetic sequencing may be a viable process in space.

Beyond Mars, Carr says, DNA sequencing may be of interest in places such as Jupiter’s moon Europa, where liquid oceans may harbor signs of life. More promising, Carr says, are places like Enceladus, a moon of Saturn that is thought to be in a potential habitable zone, and that has much less intense radiation.

“I do think we’ll see DNA sequencing in space at some point,” Carr says. “Hopefully we’ll get a chance to be a part of that.”