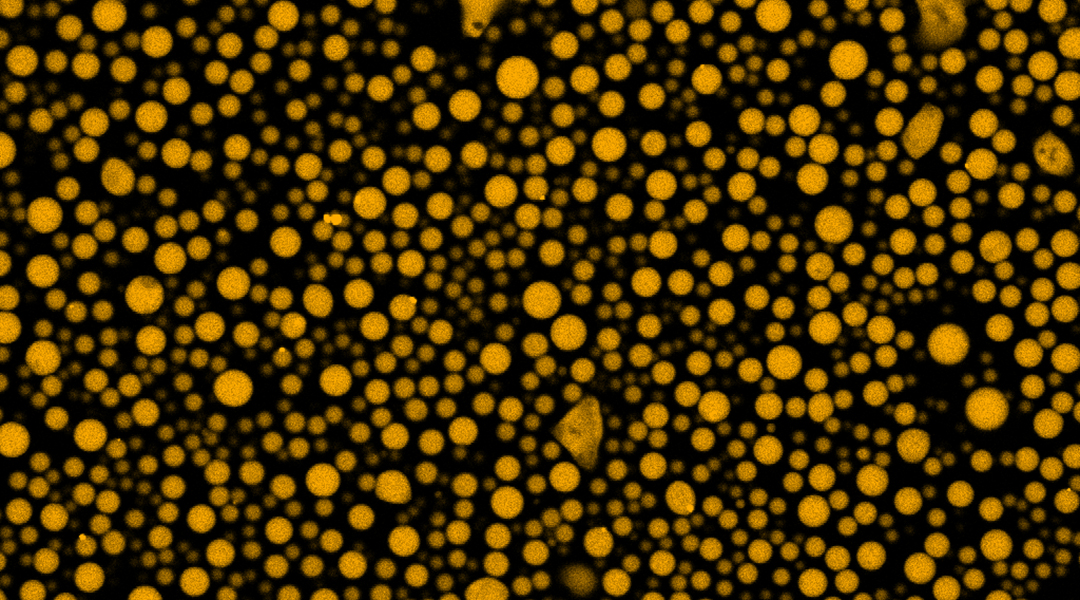 Virologist Ed Rybicki once described viruses as “organisms at the edge of life”. As they must use the cells of their host to replicate — whether animal, plant, bacterial, or fungal — the classification of viruses as living or non-living organisms has long been a subject of intense debate. Some RNA viruses, including those that cause measles and rabies, make use of membraneless compartments known as viral factories in which viral components, such as RNA and proteins, are assembled.

In a recent paper published in the journal Advanced Materials, a team from Tel Aviv University led by Ayala Lampel have reported the formation of artificial liquid compartments inspired by these viral factories.

“Viral factories are formed by spontaneous, weak interactions between proteins and nucleic acids, where both protein-protein and protein-nucleic acid interactions are thought to mediate the compartments’ formation,” explained Lampel in an email. “The exact mechanism of their formation, how they recruit client molecules, and host viral replication and assembly is still not entirely clear.”

The localization and confinement of cargo molecules in these artificial liquid compartments opens up a wide variety of possible applications in biological systems, such as the encapsulation of enzymes to promote biocatalytic reactions or the site-specific delivery of anti-cancer chemotherapies, to name a few.

“Current drug delivery or microreactor systems suffer from major limitations, such as limited permeability, poor loading capacity, harsh production conditions, and uncontrollable release of payloads, which lead to less efficient treatment,” said Lampel. “Yet, over years of evolution, nature has found the ultimate solution for these challenges: cellular compartments.”

Inspired by the measles virus “P protein” — an integral component of its viral factories — Lampel and her co-workers designed a short peptide containing amino acids from a disordered region of the protein to promote the formation of tiny, independent compartments. The structural disorder of these short peptides influences their interactions with other molecules and allows them to form complexes with RNA, which are the basis of the artificial liquid compartments described in the study.

Controlling the dynamics of intrinsically disordered systems is a significant hurdle to overcome. “The major advantage of our strategy is that the use of minimalistic peptide building blocks allows one to tune and control the properties of the resulting compartments by very simple changes to the chemical composition of the peptide, and leverage that for specific application, [for example], release of payloads on demand,” Lampel explained.

To demonstrate the artificial compartment’s capabilities, the research team showed that the fluorescent dye rhodamine B could be encapsulated and then released by removing a specific functional group from an amino acid in the peptide under irradiation with ultraviolet light. This result provides a proof of concept that a system like this could eventually be used to deliver chemotherapeutic drugs inside tumor cells, for example.

While these new developments are a promising addition to a burgeoning field, the translation of any research from the lab to a biotechnological or clinical application is a long and painstaking process.

“Peptide-based liquid compartments have tremendous potential in drug delivery applications and as microreactors for control and regulation of catalytic and biocatalytic processes,” wrote the team in their paper. “Yet, the stability of these compartments in physiological conditions and their immunogenicity should be further studied and optimized before this application can be realized.”

Degradable microrobots could help deliver cells within the body
The Promise of Cyborganic Beings
Are biohybrid electronics the future?
Delivering CRISPR gene-editing therapy: What’s holding us back?