Membrane permeability of the capsules can be changed by physiological pH and temperature stimuli, which allows for the uptake and sustained release of protein mimics. 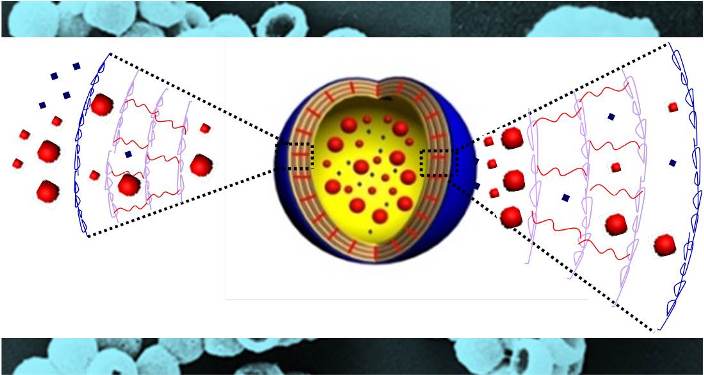 Cell membranes are complex and highly dynamic systems. Made of amphipathic lipids and proteins, their main function is to protect the cell but also to enable transport in and out as well as communication with its surrounding. Artificial cell membranes aim to mimic several features of living cell membranes. The ability of certain bioinspired systems to respond to stimuli to control transport behavior was one of the first things to be investigated. Whereas most of these systems were designed to release cargo by a single stimulus, it would be appealing if a system could react to a combination of two triggers or more.
The introduction of polymeric nanosystems able to respond to stimuli associated with pathological conditions is particularly interesting. Sustained cargo release could be triggered for biomedical applications. Multifunctional and responsive hollow capsules are ideal candidates to establish compartments and to mimic cell membranes. Unfortunately, a multi‐responsive capsule system with tunable membrane permeability for post‐encapsulation of biomolecules under physiological conditions and their controlled release is difficult to realize. 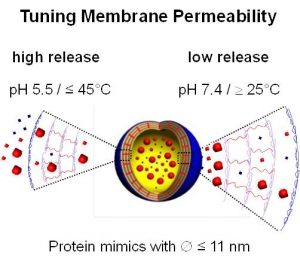 Researchers from the Leibniz-Institute for Polymer Research in Dresden have prepared pH and temperature dual-responsive and photo-cross-linked hollow capsules. Their uptake and release properties were highly affected by changes in the external stimuli temperature and internal stimuli pH of the phosphate-containing buffer solution, by the degree of photo-cross-linking, and the size of cargo. The capsules show controllable uptake and release behavior for nanometer-sized protein mimics and are attractively mimicking cell functions due to their tunable membrane permeability. Future application of those micrometer-sized capsules is directed towards establishing polymersome-containing multicompartments with controlled membrane permeability e.g. in synthetic biology.