Millimeter-scale robots were shown to mimic the movement and behavior of living insects for advanced materials science, biological, and biomedical applications. 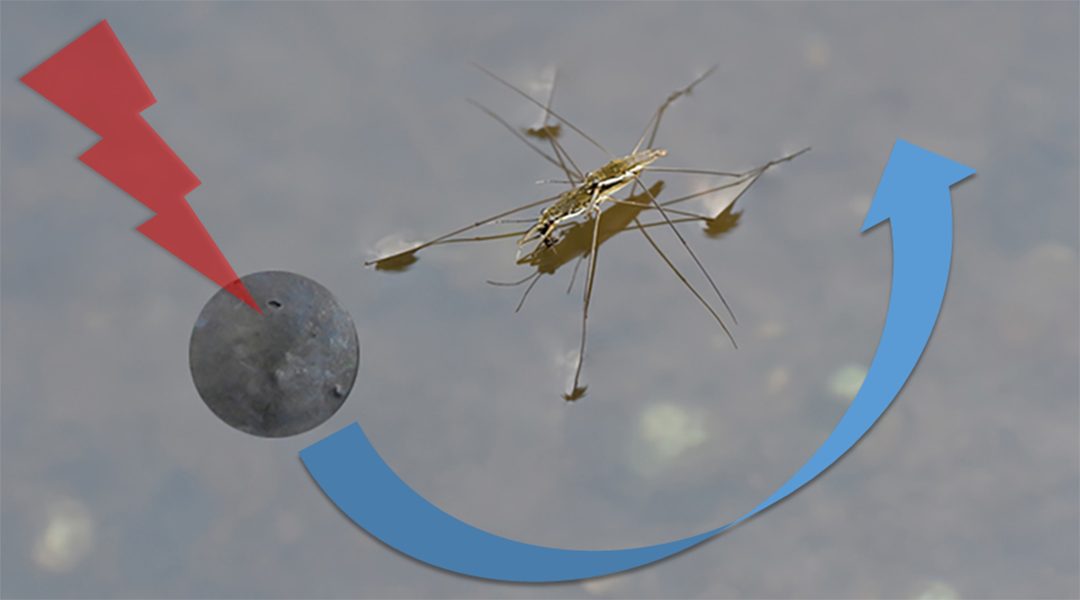 Biological species have long been a source of inspiration for researchers, especially in robotics where versatility and efficiency are highly important in creating adaptive, fluid robots. It may seem odd but insects are of particular interest as, according to researchers, they move with a method of locomotion that is more advanced and more easily replicable compared to mammals.

“There is a great interest in understanding and achieving remote manipulation of bioinspired insects,” says Eijiro Miyako, associate professor in materials chemistry and bioengineering at the Japan Advanced Institute of Science and Technology (JAIST). “The exploration of their diverse functionalities and controllable, locomotive actions offers researchers new opportunities to integrate advanced movement into their robots.”

In an article recently published in Advanced Intelligent Systems, Miyako and his team developed millimeter-scale robots, called millibots, which were inspired by insects and built from multi-functional materials that allowed the team to control the bot’s movement and function through light and applied magnetic fields. “Light and magnetic fields are often used as a strong driving force (or power) for the remote control of robots because they can easily manipulate objects without any contact,” said Miyako.

The team used a combination of three materials — magnetite, a metal-organic framework called zeolitic imidazolate framework (ZIF-8), and polytetrafluoroethylene (PTFE) — to endow the robots with specific characteristics. “Magnetite was chosen due to its strong photothermal conversion effect, i.e., its ability to convert light into energy, and its inherent magnetism to lend the synthetic insects dynamic mobility,” said Miyako.

“The PTFE also functions as an excellent matrix and provides good mechanical stability to the robot’s architecture, also rendering it water repellent,” he added.

The team’s millibots were shown to effectively mimic the behavior and properties of various insect species, such as floating and walking on water like a water strider, owing to the presence of its waterproof PTFE body. “Their movement is driven by thermal convection generated from the powerful photothermal properties of our laser-induced millibot, which promotes dynamic motion in a small disk at the air-water interface,” said Miyako. “The directional movement of the composite was fully controllable by chasing a disc with a laser beam on the water surface.”

The ZIF-8 framework endowed the artificial insects with a unique capability: a chemically modifiable skin. ZIF-8 are a class of metal-organic framework that have tunable pore sizes and chemical functionality, which the team used to coat the robot’s frame. The inspiration came from Asian bombardier beetles, which are known to spray a gas composed of different chemicals to keep their enemies at bay. In one experiment, they showed that the porous material could absorb or desorb carbon dioxide, which is controllable through external stimuli.

The team also demonstrated the millibot’s ability to carry and release loads, which was demonstrated through “artificial spawning” in a synthetic version of the Appasus japonicus, a type of giant water bug. “[For this experiment], we used encapsulated rhodamine B gelatin particles as model synthetic eggs, which were then mounted onto a nanocomposite on the ZIF-8 framework,” said Miyako. “Using light and magnetic fields, we could control the movement of the ‘bug’ and release the eggs in desired amounts at specific locations.”

This controlled design and functionality represents a promising stepping stone for future developments in materials science and biomimetic robots. “In addition to their application synthetic biology and in furthuring our understanding of living organisms, our millibots have tremendous potential in developing advanced drug delivery systems. Different substrates could be attached and released selectively through external stimuli, making them valuable for a host of biomedical application,” said Miyako.

The soft touch of intelligent, robotic systems
Caturo: The smallest concentric tube robot ever made
A swarm of flying 3D printers inspired by bees
Improving the Precision of Surgical Instruments with Magnetic Control