A microRNA-responsive drug release system will strengthen the selectiveness of the photodynamic therapy system. 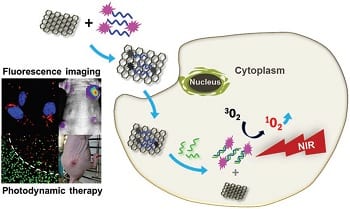 Current cancer treatments often show limitations arising from the substantial side effect of anticancer drugs that, in addition to tumors, also destroy normal tissue. To address this problem, researchers in the field of nanomedicine have struggled to develop new therapeutic strategies by combining nanotechnology with medicine. Among the approaches, photodynamic therapy is a promising strategy for the selective destruction of tumor target lesions utilizing a local light source to treat the cancer. The light sensitive drug called photosensitizer  shows an anticancer effect with light irradiation generating deadly molecules – the so-called reactive oxygen species (ROS). To improve the therapies and reduce the side effect on normal cells, it is necessary to achieve the tumor-selective activation of the photosensitizer by finding the right position and the right timing. 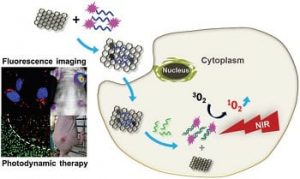 Recently, Prof. Dal-Hee Min’s group of the Seoul National University developed the microRNA-responsive drug release system. To enhance the selectivity in the photodynamic therapy, they focused on the role of cancer-specific microRNA acting as a cancer selective stimulus for initiating the drug release. Their photodynamic therapy system is activated by the presence of the oncogenic microRNA inside cancer cells. These cells consist of DNA-mimicking nucleic acid connected with photosensitizer, as a microRNA-responsive drug, and of two-dimensional carbon material graphene oxide as a photosensitizer quencher and delivery vehicle. They demonstrated how the photosensitizer showed a fluorescence signal responding to target oncogenic microRNA, making it possible to be used for an image based diagnostic agent. At the same time, the photosensitizer drug could be activated in a tightly regulated manner by responding both to the intracellularly abundant specific microRNA in cancer cells and the optimal light source.

This tailored formulation will strengthen the selectiveness of the photodynamic therapy system. It can eliminate the potential risk of unwanted side effect on normal cells arising in conventional photodynamic therapy. The microRNA-responsive drug release system could be widely applicable to various kinds of cancerous diseases concerning microRNAs.