1.8mm wind turbines could be used to power cellphones, microelectronics, and have attracted the interested of WindMEMS. 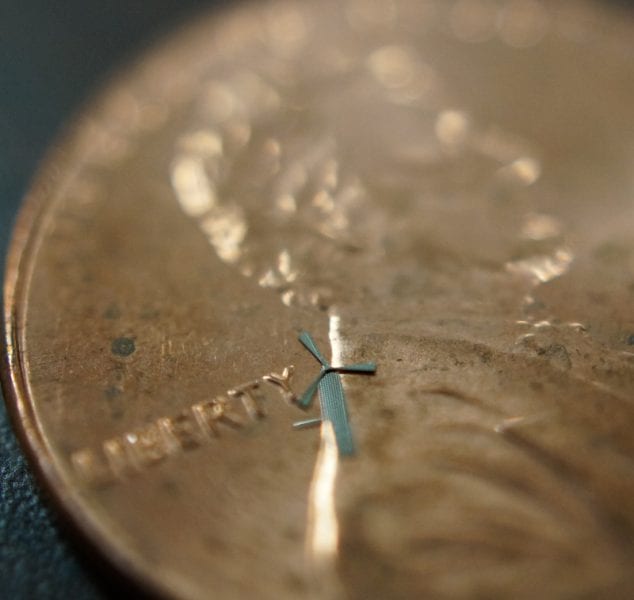 One of Roa’s micro-windmills, placed on a US penny.

A UT Arlington research associate and electrical engineering professor have designed a micro-windmill that generates wind energy and may become an innovative solution to cell phone batteries constantly in need of recharging and home energy generation where large windmills are not preferred.

Smitha Rao and J.-C. Chiao designed and built the device that is about 1.8 mm at its widest point. A single grain of rice could hold about 10 of these tiny windmills. Hundreds of the windmills could be embedded in a sleeve for a cell phone. Wind, created by waving the cell phone in air or holding it up to an open window on a windy day, would generate the electricity that could be collected by the cell phone’s battery.

Rao’s works in micro-robotic devices initially heightened a Taiwanese company’s interest in having Rao and Chiao brainstorm over novel device designs and applications for the company’s unique fabrication techniques, which are known in the semiconductor industry for their reliability.

“The company was quite surprised with the micro-windmill idea when we showed the demo video of working devices,” Rao said. “It was something completely out of the blue for them and their investors.”

“The micro-windmills work well because the metal alloy is flexible and Smitha’s design follows minimalism for functionality.” Chiao said.

WinMEMS became interested in the micro-electro mechanical system research and started a relationship with UT Arlington. Company representatives visited with the UT Arlington team several times in 2013 to discuss collaboration.

An agreement has been established for UT Arlington to hold the intellectual properties while WinMEMS explores the commercialization opportunities. UT Arlington has applied for a provisional patent.

Currently, WinMEMS has been showcasing UT Arlington’s works on its website and in public presentations, which include the micro-windmills, gears, inductors, pop-up switches and grippers. All of those parts are as tiny as a fraction of the diameter of a human hair.

These inventions are essential to build micro-robots that can be used as surgical tools, sensing machines to explore disaster zones or manufacturing tools to assemble micro-machines.

“It’s very gratifying to first be noticed by an international company and second to work on something like this where you can see immediately how it might be used,” said Rao, who earned her Ph.D in 2009 at UT Arlington. “However, I think we’ve only scratched the surface on how these micro-windmills might be used.”

The micro windmills were tested successfully in September 2013 in Chiao’s lab. The windmills operate under strong artificial winds without any fracture in the material because of the durable nickel alloy and smart aerodynamic design.

“The problem most MEMS designers have is that materials are too brittle,” Rao said. “With the nickel alloy, we don’t have that same issue. They’re very, very durable.”

The micro-windmills can be made in an array using the batch processes. The fabrication cost of making one device is the same as making hundreds or thousands on a single wafer, which enables for mass production of very inexpensive systems.

“Imagine that they can be cheaply made on the surfaces of portable electronics,” Chiao said, “so you can place them on a sleeve for your smart phone. When the phone is out of battery power, all you need to do is to put on the sleeve, wave the phone in the air for a few minutes and you can use the phone again.”

Chiao said because of the small sizes, flat panels with thousand of windmills could be made and mounted on the walls of houses or building to harvest energy for lighting, security or environmental sensing and wireless communication.

He added that it has been fulfilling to see his former student succeed and help move innovation toward the marketplace.

“To see a company recognize that and seek you out for your expertise speaks volumes about what UT Arlington means to the world,” he said proudly.

Invasive species: Can we learn to live with them?
Algal Blooms in Streams, Lakes, and Coastal Waters
Amphibians of the American Southwest are in hot water — will they thrive or dive?
Climate Change Will Require Heavy Lifting