The European space probe Rosetta has reached the comet Chury. Micro motors from the swiss manufacturer maxon have traveled with it. 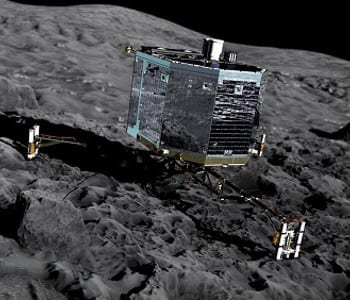 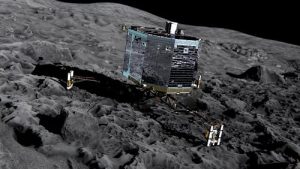 The Philae lander is scheduled to touch down on comet 67P in November. © 2014 ESA/Rosetta/NAVCM

On August 6, the big day came: After a journey of more than ten years, the Rosetta space probe reached the comet 67P/Churyumov-Gerasimenko, known as “Chury” for short. For the first time in the history of space travel, a probe has rendezvoused with a comet. It will now orbit and map the comet and gather various types of data. The first images received have already yielded astonishing new insights: The comet Chury, which is 4 km wide, is not round or oval, but instead looks like two rocks loosely stuck together. At -70°C, the surface is much warmer than expected and the first information indicates that it is covered with a black layer of dust.

Rosetta will now gradually approach the comet, until a distance of only 10 km separates them. The most difficult part of the mission will take place in mid-November 2014, when the Philae lander is scheduled to touch down on Chury. It will be the first controlled landing on a comet; a pioneering feat with the aid of DC motors manufactured by maxon. This is not the first time that the micro drives from Switzerland have been the first choice for space missions. The company has long-term experience with space travel. SpaceX’s Dragon spacecraft, which transports cargo to the ISS station, also contains maxon motors. The same holds true for the Mars rovers, which have been diligently traveling across the surface of the red planet for many years.

For more than ten years, the Mars rover Opportunity has been exploring the red planet and almost incidentally set a new long-distance record. As NASA announced, the almost 200 kg vehicle has already traveled more than 40 km. This means Opportunity nullifies the previous record set 41 years ago by Soviet rover Lunochod 2. Back then, Lunochod 2 traveled approx. 39 km within five months, as researchers have now been able to calculate based on the tracks it left behind.

Not only NASA is ecstatic about the new record set by “Oppy”. At maxon motor everyone is “tremendously proud” of the rover’s performance, as CEO Eugen Elmiger revealed. After all, the motor specialist played a large role in this Mars mission, by contributing 43 drives. Brushed DC motors by maxon are responsible for driving the six wheels, the steering mechanism, the RAT (rock abrasion tool), the robotic arm, the cameras, and other components.