Methanol Then and Now

Making methanol for use as a renewable energy carrier. 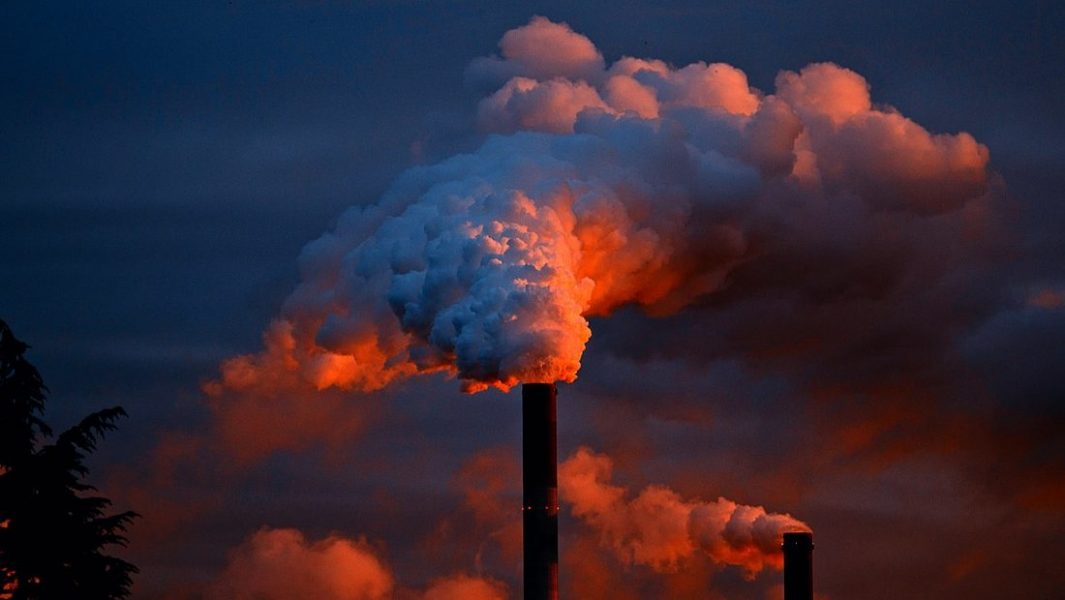 I’ve read a lot of papers recently on ways and means of making methanol for use as a renewable energy carrier. My motivation for learning about this field stems from the mushrooming interest in the utilization of carbon dioxide as a C1 feedstock for making methanol. This is one of a number of emerging chemistry and engineering strategies to help ameliorate climate change.

Methanol, the focus of this article, has a long and fascinating history, which can be traced to its use for embalming mummies in ancient Egypt, the methanol being obtained through the pyrolysis of wood. Many millennia later, ethanol was isolated in 1661 by Robert Boyle, analyzed in 1834 by Jean-Baptiste Dumas and Eugene Peligot, and its production industrialized in 1923 by Alwin Mittasch and Mathias Pier, working at BASF. This technological innovation led to the creation of a global methanol industry.

Today, more than 90 methanol plants span the entire globe with a production capacity of around 110 megatons and a demand of about 40% for emerging energy applications, with around 10% for use as a chemical feedstock. Each year the global methanol industry contributes about 90 000 jobs and creates about $55B in economic activity.

While the dominant feedstocks for making methanol continue to be natural gas, coal, biomass, and waste, mainly because of concerns over the adverse effects of greenhouse-gas-induced climate change, there is now interest in using carbon dioxide as the source of carbon for value-added chemicals and fuels. It’s significant that the desire of the transportation industry to replace diesel by dimethyl ether as a cleaner burning fuel has re-focused interest in its production from methanol made from carbon dioxide.

The original BASF process was based on the gas-phase heterogeneous catalytic conversion of synthesis gas CO/H2 to methanol under high pressures and temperatures using a chromium- and manganese-oxide-based catalyst. Present day catalysts for manufacturing methanol are based for example on copper–zinc oxide hetero-nanostructures supported on aluminum oxide. They function just as efficiently but under much milder conditions of temperature and pressure.

More recently, catalysts of this type have been found to display high activity and selectivity towards the conversion of CO2/H2 to methanol, avoiding the need for synthesis gas. This is considered a significant development on the road towards a sustainable methanol economy.

In this context, there has been a substantial effort devoted to trying to understand the surface chemistry that underpins the heterogeneous catalytic hydrogenation of carbon dioxide. The main challenge has been to identify, under realistic reaction conditions of temperature and pressure, which of three possible surface intermediates, carbon monoxide (CO), carboxyl (COOH), and formate (HCOO), participate in the dominant reaction pathway to methanol, as sketched in Figure 1.

Another challenge has been to comprehend what is agreed to be the synergist role of the copper and the metal oxide in the formation of methanol, known as the metal-support effect.

These challenges bring me to highlight a particularly elegant recent study of methanol synthesis using ZrO2-supported Cu nanoparticles of around 2 nm in size. The results of this deeply analytical study have thrown a bright new light on the aforementioned mechanistic questions.[1] 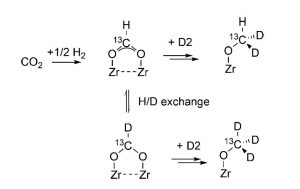 Figure 2. Using a combination of FTIR and MAS NMR spectroscopy together with 2D2 and 13CO2 isotopic labeling it is possible to elucidate the surface chemistry responsible for the hydrogenation of carbon dioxide on Cu@ZrO2.[1]

Using a powerful combination of kinetics, in situ FTIR, ex situ MAS NMR, and 2D and 13C isotope labelling studies and density functional theory (DFT) computational modeling, it was shown that hydrogenation of the surface reaction intermediate formate was the dominant reaction pathway to product methanol.

Based on DFT calculations, the metal-support effect was postulated to arise from charge transfer from the Cu nanoparticles to CO2 adsorbed on the ZrO2. This accumulation of negative charge on the C of surface-bound CO2 activated it towards reaction with H spilled over from dissociation of H2 on the Cu, to form surface-bound formate, HCOO. The formate is thought to be located at the interface between the Cu and ZrO2.

The favored reaction scheme for the transformation of the surface-bound formate intermediate to surface methoxide, determined from combined IR-NMR spectroscopic measurements, is shown in Figure 2. An interpretation of the isotope-labeling results illustrated in this figure, indicates that the observed H–D exchange of the formate C–H bond to form DCOO, is faster than its hydrogenation to surface methoxide, OCHD2. 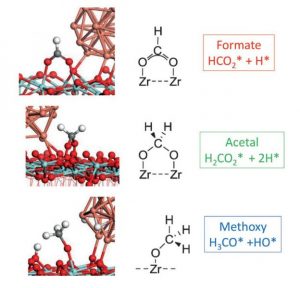 Figure 3. Surface reaction intermediates with the lowest free energy in the hydrogenation of carbon dioxide by Cu@ZrO2.[1]

The surface acetal H2CO2, which would be formed from transfer of a second H from the Cu to the surface formate HCOO, is inferred from the DFT calculations but not observed under the experimental conditions employed in this study, Figure 3.

The DFT calculations show there exists a small activation energy barrier for interconversion between formate-to-acetal, implying they exist in equilibrium, thereby enabling the observed H-D exchange of D2 with the HCOO intermediate, Figure 2.

The reaction of the acetal that follows involves a concerted transfer of H from the Cu to the acetal C, which results in the formation of surface methoxyl and hydroxyl groups. They can react further with H spilled over from the Cu to form methanol and water that desorb from the ZrO2 to complete the catalytic cycle CO2 + 3H2 -> CH3OH + H2O, with desorption energies determined by DFT modelling.[1]

The knowledge gained from this insightful study should serve the heterogeneous catalysis community well, as it provides a valuable blueprint for how to design, prepare and integrate metals, metal oxides and supports into composite materials that can selectively hydrogenate carbon dioxide to methanol with higher efficiencies and under less extreme conditions than those currently practiced in the methanol industry.

This article was updated on 25.04.2018 to add more more information on the study being described.