A problem with metal–organic frameworks (MOFs) is that their slightly ionic nature renders their structure vulnerable to deformation. 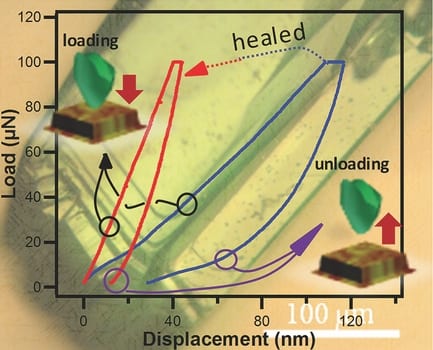 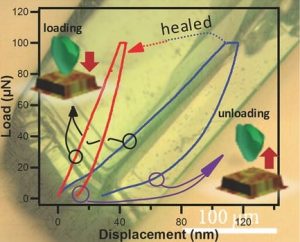 A problem with metal-organic frameworks (MOFs) is that their slightly ionic nature renders their structure vulnerable to deformation. These crystalline materials offer potential in the fields of energy storage and drug delivery thanks to their regular, organized porous structure, which is capable of trapping small molecules or oligomers. But simply soaking the MOFs in an ionic solution can cause a change in the structure and alter the MOF enough to destroy its usefulness for a specific purpose. An interesting solution to this vulnerability, however, could lie in the nature of the problem itself: if these materials are dynamic enough to be so easily deformed, can the process just as easily be reversed? In other words, can MOFs be designed to “heal” themselves?

Ziguang Chen and colleagues set about investigating this idea from the approach of looking at whether small crystals could be melded to form larger crystals. Copper-based MOFs, or Cu-MOFs, were ground into powders and applied to bulk solid surfaces to make a solid membrane. These membranes were then briefly soaked in water, a polar solvent, to release organic linkers from the framework and disrupt the structure. To demonstrate the healing process, the membrane was cut with a knife, and the wound was treated with diethylformamide (DEF), which acted as a healing agent. Under ambient conditions, it was found that the wound healed to an extent that allowed the membrane to recover most of its flexibility. Closer inspection revealed that, indeed, crystals that had previously been dispersed by the water re-aggregated and bundled together on addition of the DEF.

This naturally raised questions about the nature of DEF and what it was doing to promote the crystals’ rebuilding. Structural studies revealed that DEF, an amphiphilic molecule, removes surface water molecules—residual from the aqueous synthesis of the MOFs—and forces a slight destabilization of the original surface configuration. This process releases energy, enough to promote binding of dangling MOF building blocks, thus instigating the “healing” process.

Exploiting these healing effects could hold huge advantages in the use of MOFs in processes such as catalysis or hydrogen storage. The potential of these structures to heal themselves even after prolonged use suggests that the lifetime of these materials could be lengthy. And in the future, such self-healing materials might find their use in engineering and construction contexts, a prospect which is undeniably exciting.