A hydrogel that can tell good from bad: this material can distinguish between normal and pathological levels of urate, a salt related to gout arthritis. 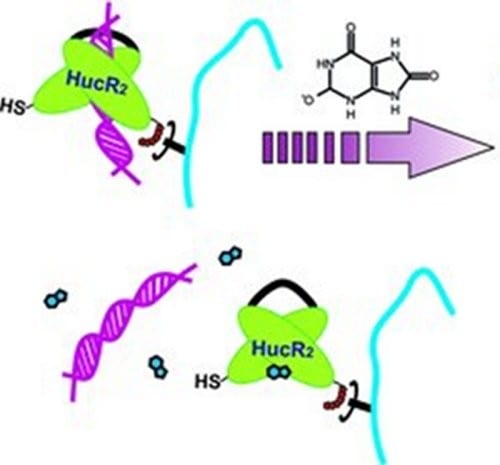 Stimulus-responsive materials that discriminate between pathological and physiological concentrations of a metabolite or disease marker hold high promises as smart biomedical devices. They might be able to detect a disease state and autonomously trigger a therapeutic response.

The synthesis of materials to specifically detect desired metabolites has been, however, limited by a lack of specific sensors that translate the concentration of an analyte into the desired response of the material. This challenge could be overcome by the development of a generic strategy to functionally incorporate the large variety of biological metabolite sensors into biohybrid materials. The predominant mechanism of such metabolite sensing is based on transcriptional regulator proteins that bind to a cognate DNA sequence in response to the concentration of a specific metabolite.

Wilfried Weber and co-workers (University of Freiburg, Germany) now show how such transcriptional regulator proteins can be used to confer metabolite-responsive properties to a hydrogel. For this aim, the transcriptional regulator protein HucR was used. It binds its cognate hucO DNA sequence and dose-dependently dissociates at increasing concentrations of urate, a salt that at elevated concentrations can lead to gouty arthritis.

The hydrogel was synthesized by coupling HucR to polyacrylamide and crosslinking this polymer by multimeric hucO DNA motifs. The addition of increasing urate concentrations triggered the dissociation of the protein-DNA interactions, the weakening of the hydrogel network and finally its dissolution. It was shown that this hydrogel rapidly dissolves at pathological urate concentrations commonly found in patients suffering from gouty arthritis while the dissolution was strongly reduced at physiological concentrations of this metabolite.

While this material might be further developed as smart implant against gouty arthritis, the general strategy described here can be expanded to other metabolites by simply exchanging HucR/hucO with a protein/DNA pair responsive to the desired metabolite.