Metabolism in Cancer Metastasis: Bioenergetics, Biosynthesis and Beyond 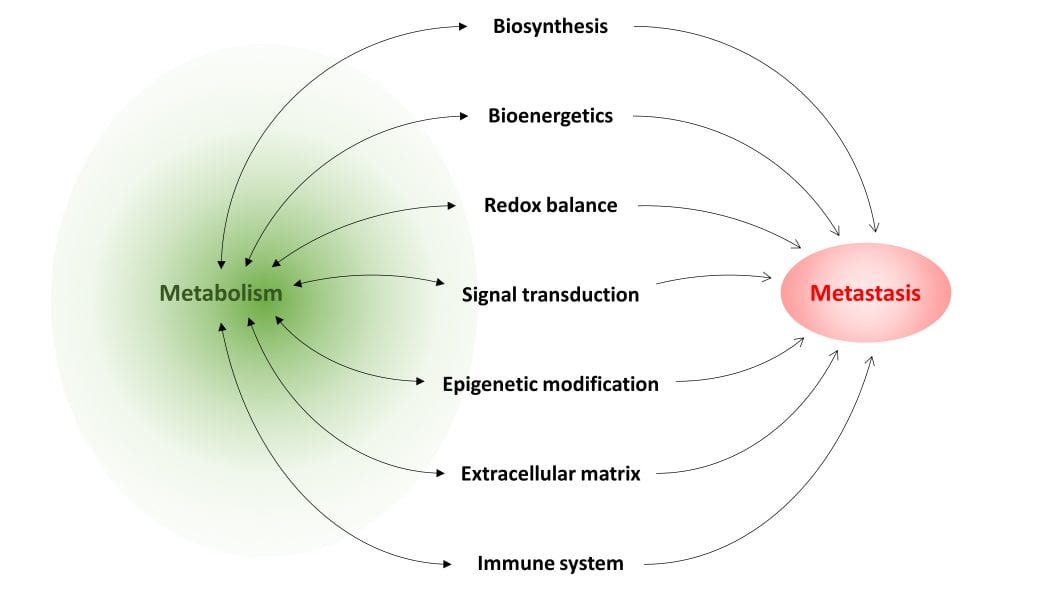 Metastasis, the spread of cancer cells from the primary tumor to other parts of the body, accounts for the vast majority (~90%) of cancer-related deaths. Unlike localized tumors that can be surgically removed, metastatic cancer is incurable, and current treatments only aim to slow the disease. A promising new paradigm for treating metastatic cancer is targeting metabolism. Metabolism – the diverse biochemical reactions that occur within living cells – generates energy for cellular processes and produces the biosynthetic intermediates required for building new cancer cells. Metabolites are also important for regulating gene expression, through their role as signaling molecules and epigenetic modifiers. Many of these metabolic processes are altered (or ‘rewired’) in metastatic cancer cells to support their survival, dissemination and growth. Metabolism may even directly drive metastatic progression. For example, the epithelial-mesenchymal transition (EMT) that often precedes metastasis is linked to specific metabolic changes, including accumulation of oncometabolites 2-hydroxyglutarate, succinate and fumarate. Therefore, insight into the metabolic rewiring that occurs during metastasis will reveal new treatment options for metastatic cancer, based on inhibiting metabolic pathways required for metastasis. 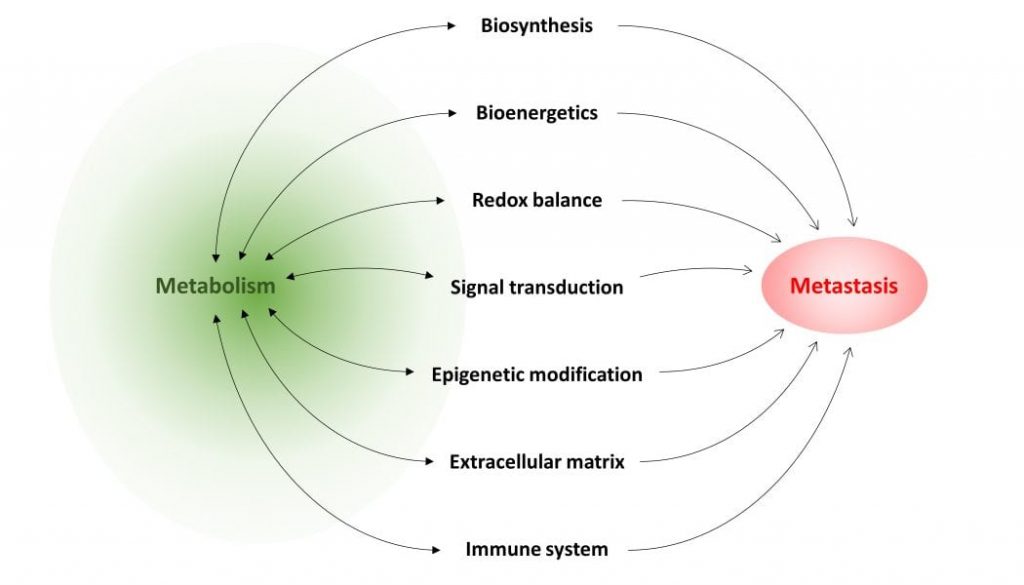 Metabolic pathways support the function, and indeed the very survival, of cells. For example, glycolysis constitutes the main mechanism by which glucose, a major carbon and energy source for cells, is broken down to release energy and supply biosynthetic intermediates, including amino acids serine and glycine. The pentose phosphate pathway runs parallel to glycolysis and channels some of the glucose into substrates for nucleotide biosynthesis, while also playing a major role in neutralizing cell-damaging reactive oxygen species via the production of NADPH.  The tricarboxylic acid (TCA) cycle, also known as the citric acid cycle or the Krebs cycle, further channels the products of glycolysis into other biosynthetic intermediates, and additionally generates large amounts of cellular energy in conjunction with oxidative phosphorylation. The TCA cycle is also the main point of entry for glutamine, the most abundant amino acid in the body, into carbon and energy metabolism. Other pathways including one-carbon metabolism and lipid biosynthesis/oxidation are also critical for maintaining cell function and survival.

In the review article “Metabolism in cancer metastasis: bioenergetics, biosynthesis, and beyond” in WIREs Systems Biology and Medicine, authors Teoh and Lunt summarize current knowledge of how metabolism can support cancer metastasis. Although metabolism supports all living cells, specific metabolic pathways are particularly important to metastasizing cancer cells and support their migratory ability, resistance to cell death, and/or ability to proliferate in a different cellular environment at a secondary site. Certain metabolites may have a regulatory role that, when dysfunctional, drives metastatic progression. Alternatively, flux through a particular pathway may supply cancer cells with important biosynthetic intermediates required for their proliferation, or provide energy under adverse conditions. These, and other roles of metabolism in metastasis, are discussed in the review. The authors also identify several common metastasis-promoting mechanisms, upon which various metabolic pathways seem to converge: generation of reactive oxygen species, which drives cell signaling to promote survival and acquisition of migratory and invasive behavior; dysregulation of epigenetic modification, which results in aberrant gene expression; and suppression of components of the immune system, in particular T cells, which allows unchecked tumor cell growth and dissemination. Many of these studies also show that by inhibiting the metabolic pathway required for a specific metastatic step, the ability of cancer cells to metastasize can be severely impaired or abolished, demonstrating the effectiveness of targeting metabolism in treating metastatic disease. The authors conclude with an overview of current limits of knowledge on this topic, and present directions for future research in this field.