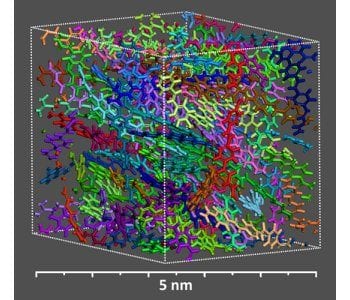 Molecular simulations have proven to be useful in the discovery of new small molecule drugs, and in the structure prediction of biomolecules such as proteins. They are emerging as reliable property-prediction tools for synthetic macromolecules as well.

Sitaraman Krishnan and his coworkers from Clarkson University and Corning Incorporated have used molecular simulations to predict thermophysical and mechanical properties of two π-conjugated polymers. Although the electron transport and optical behaviors of these polymers are well-characterized, information on properties like elastic modulus and glass transition temperature are not as readily available. Glass transition temperature, Tg, is the temperature above which the polymer softens considerably, undergoing a large decrease in stiffness. Along with elastic modulus, Tg is a useful parameter in the design of devices such as flexible LED displays and solar panels that use conjugated polymers.

There are some inconsistencies in the known values of elastic modulus and Tg for even fundamental conjugated polymers such as polyacetylene (PA) and poly(p-phenylene vinylene) (PPV). The literature values of the elastic modulus of PA and PPV at room temperature are scattered over a range spanning two to three orders of magnitude. Similarly, differences in the reported values of the Tg of PPV are greater than 100 °C. Polymer properties are generally quite dependent on their synthesis and processing history. The dispersity in the lengths of the polymer chains, the variations in polymer architecture caused by branching or cyclization, chemical defects such as oxidation, the presence of plasticizers or other low molar mass impurities, and even the method of measurement can greatly alter the measured property values. These effects seem to be particularly important in the case of the two conjugated polymers investigated. Molecular simulations, on the other hand, allow one to probe a virtual ensemble of perfectly defect-free identical polymer molecules as a basis for comparison with measurements. Architectural variations and chemical defects can be introduced in a controlled manner, if their effects need to be studied.

In their recently published work, the researchers compared atomistic simulation predictions for PA and PPV with results from empirical measurements. They used molecular dynamics (MD) for property predictions. MD is a method in which the motion of a set of interacting atoms in the ‘simulation box’ is modeled using Newton’s equation of motions. Mechanical properties were computed by measuring how the potential energy of interaction between the atoms in the polymer changed when the shape of the simulation box was changed, that is, by subjecting the polymer to a virtual mechanical strain. 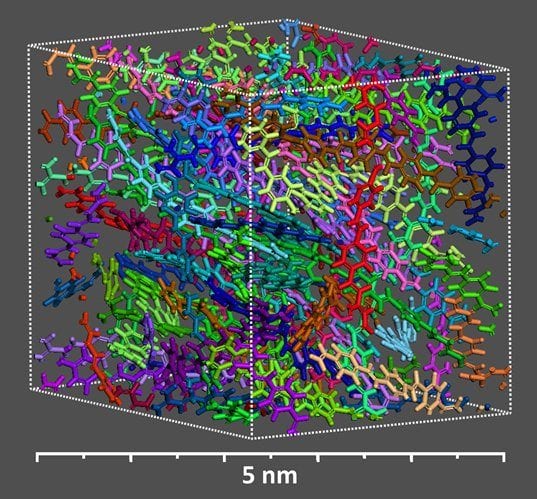 Conventional mechanical characterization techniques, such as tensile testing, stretch the polymer specimen to different lengths and measure the force required to produce a given extension of the specimen. However, polymer chains in the sample can align or orient along the stretching direction, changing the nature of the material during measurement. Krishnan and his coworkers used the technique of dynamic nanoindentation instead. They measured stiffness by applying relatively small oscillatory loads, of micronewton magnitude, on the polymer films using a diamond microindenter. The relatively small forces used in the measurement yielded reproducible stiffness values, which were in agreement with the results from quasistatic nanoindentation experiments that used a small non-oscillatory load. The results were also in good agreement with the MD predictions.

In MD simulations, the lengths of the polymer chains that can be used are limited by computational speed, and are often significantly smaller in comparison with real-life samples. Conversely, the heating and cooling rates in simulations are much higher (a factor of 1011 difference) than those in actual calorimetry experiments. Despite these large differences, remarkable agreements between the predicted and measured values of the thermal transition parameters and Young’s modulus were found.

The simulations also allowed them to examine various molecular properties and phenomena that are not easily accessible through laboratory measurements. For instance, the variation of the potential energy of intermolecular interactions with temperature was used to identify the glass transition temperature. Properties such as the coefficient of thermal expansion characterizing the change in the dimensions of the polymer film with temperature, the torsion angle distributions quantifying the twists and turns of the polymer chain in the solid, and the end-to-end distance reflecting the rigidity of the polymer chains, were calculated at different temperatures. p-Conjugation of the sp2 hybridized carbon atoms in the PPV chain would be expected to impart planarity to the molecule, but a non-planar structure, consistent with previously reported neutron diffraction experiments, was predicted. A worm-like motion, in contrast with the crankshaft motion that is associated with saturated analogues, was proposed for the movement of the polymer chains in the melt.

This study demonstrates that atomistic simulations can reliably complement existing tools for the prediction of the properties of solid polymers.