Mechanical and Piezoelectric Properties of PZT and LNKN Ceramic Foams 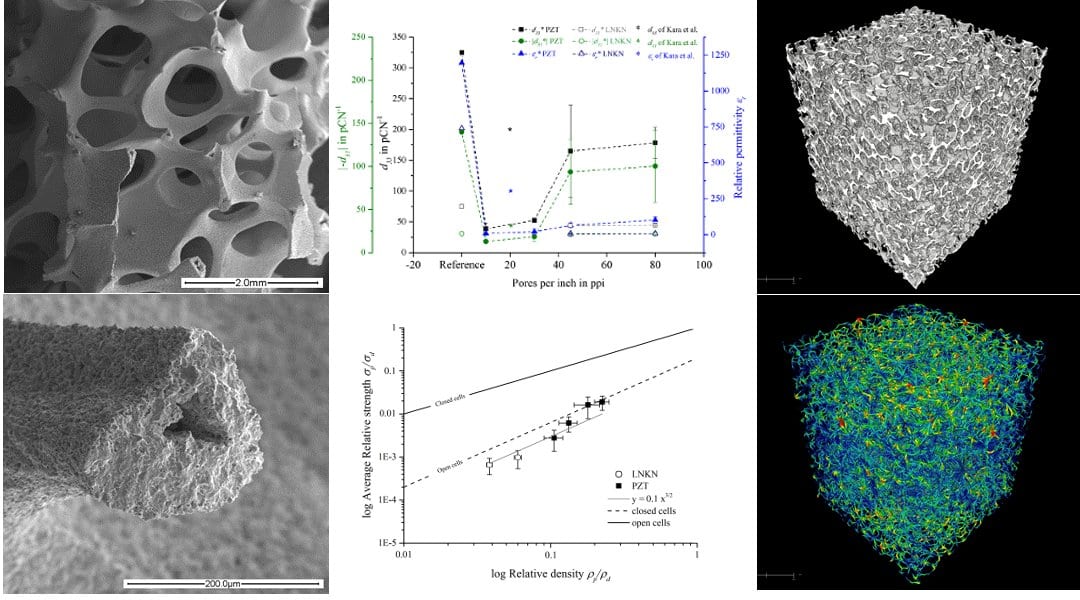 In this work multifunctional composites of porous piezoelectric foams made of lead zirconate titanate (PZT) are compared to ecologically beneficial lead-free lithium sodium potassium niobate (LNKN-6) to fulfil RoHS requirements. Using common replica technique polymer foams with different cell sizes were used as template and coated by impregnation of slurries filled with two different types of piezoelectric ceramic powders. After debinding of the organic template the structure of the sintered ceramic foams exhibit an interconnected pore structure corresponding to the initial template network with open porosities over 75 vol%.

The mechanical and piezoelectric properties were determined in dependence of the varied template cell size between 0.3 to 2.5 mm. By increasing the porosity the piezoelectric and mechanical properties were reduced. The fracture strengths increased inversely with decreasing cell size. In addition it was shown that fracture strength was related to the relative density of the foams with the power of 1.5 as described in Gibson’s and Ashby’s theory of brittle open-porous foams.

Decreasing of pore size and strut thickness increases the amount of struts as well the resulting piezoelectric properties. The connectivity of the regarding pore network also correlates with decreasing cell size.