Unusual compound is the first metallic oxygen ion conductor of its kind, as well as the first that is active at room temperature. 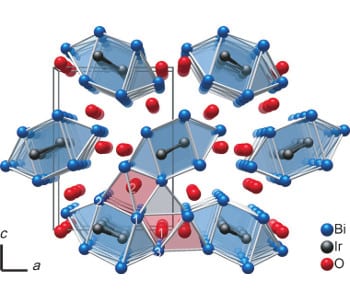 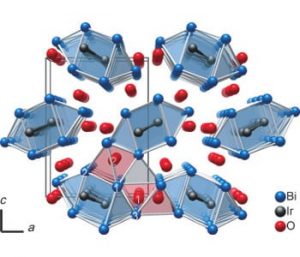 Fuel cells for decentralized energy production require oxygen ion conductors: materials that can store oxygen as ions, and then transport and release it. German researchers have now found an unusual compound that is the first metallic oxygen ion conductor of its kind, as well as the first one that is active at room temperature. As reported in the journal Angewandte Chemie, its activation energy for oxygen ion transport is an order of magnitude lower than that of all previously known materials.

Most materials that allow for the storage of molecules as ions are compounds with a layered structure, such as graphite or clays. For the storage of oxide ions and their transport in solids, the ceramic material YSZ (yttrium-stabilized zirconium dioxide) is known from use in solid oxide fuel cells. The conducting property of this material is activated once it reaches a temperature of several hundred degrees Celsius. Conduction of oxygen ions with fully reversible oxygen absorption in a metallic compound has never been observed. A team led by Michael Ruck has now discovered such a compound: a previously uncharacterized nanoparticle compound made of the metals bismuth and iridium (Bi3Ir) spontaneously activates molecular oxygen from air or from liquids and incorporates these as oxide ions, even at room temperature. The researchers from the Technische Universität Dresden, University of Munster, and the University of Giessen have demonstrated that this is not an ordinary oxidation; instead it involves the inclusion of oxygen between the intermetallic strand structures. This intercalation is fully reversible: treatment with hydrazine at room temperature or with hydrogen at 150 °C releases the oxygen and regenerates the original structure.

The nanoparticles are only about 60 nm in diameter and have an amorphous shell that is critical for the activation of molecular oxygen. As determined by X-ray diffraction and electron microscopy, the crystal structure is hardly changed by the incorporation of oxygen. Computational models show that only the distances between the intermetallic strands are increased to make room for the diffusion of oxygen ions and their storage. These transport routes are linear and there are plenty of directly adjacent, easily accessible cavities.

“This explains the extremely high mobility of the oxide ions, even at room temperature,” says Ruck. “The substance remains metallic because the bismuth atoms remain bound to the iridium ions.” The researchers hope that the conductivity of oxide ions at low temperature will allow their discovery to contribute to the development of more efficient solid oxide fuel cells, since these currently require operating temperatures of 600 °C and above. The high sensitivity and reactivity of this material toward molecular oxygen also makes it a candidate for use in sensor and catalyst technology.

Minimizing the carbon footprint of cooling systems
New database to accelerate innovation in emerging photovoltaics
Living Well With Plastics: The Politics of the Plastics Crisis
One step closer to producing green hydrogen fuels