Understanding how a completely different neural structure achieves the same function as the human brain opens up possibilities for designing new types of AI systems. 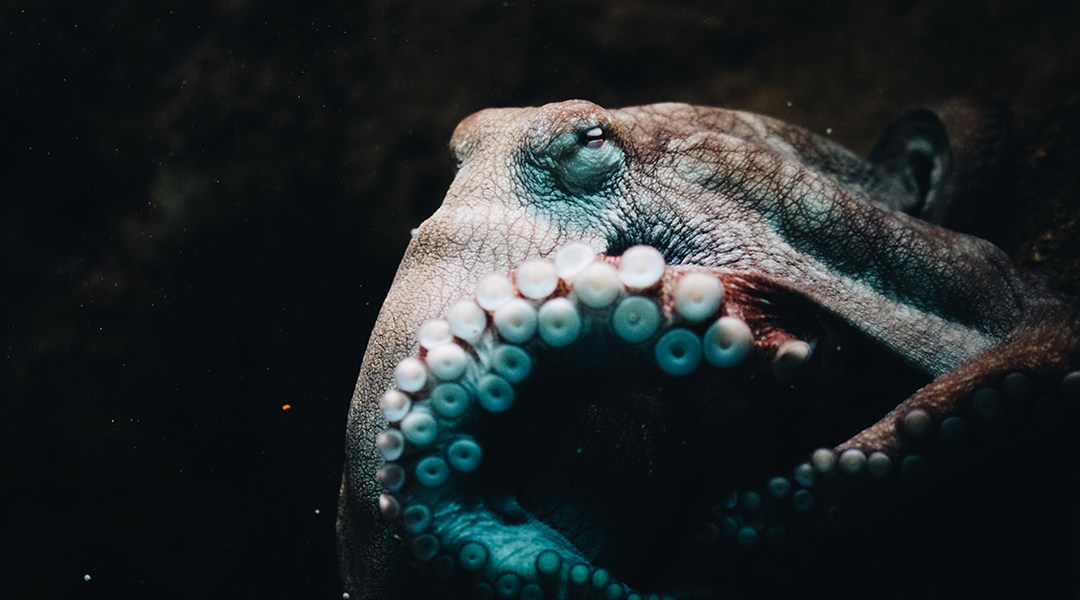 Look into the eyes of an octopus and you might recognize what’s staring back.

The construction of the octopus eye itself is like our own, but that’s where the similarity ends. Behind the eye, the octopus’ brain is wildly different from mammalian brains in terms of architecture and design, yet it uses similar building blocks and accomplishes the same tasks.

For a team of neuroscientists in Oregon, understanding this invertebrate brain is both fascinating and informative. “The sensor is really similar, but the brain that’s processing the information is completely different,” explained Cris Niell, professor of biology and neuroscience at the University Oregon.

Niell is one of several authors of a study published in Current Biology, which maps the visual system of our cephalopod cousins for the first time.

The similarity between the octopus and mammalian eye backed by completely different brains fascinated Niell and his team. Understanding how a completely different neural structure achieves the same function reveals multiple possibilities for designing these types of systems. In the case of octopus vision, a system that achieves amazing feats, such as seeing underwater or directing the color changing camouflaging ability of their skin.

To unravel the mystery of the octopus’ visual system, this multi-disciplinary team first used single cell RNA sequencing to categorize cells according to which genes they expressed. According to Niell this gives each cell type a signature or barcode to identify it. “It’s a signature that also tells you something about what the neuron does, as well as how it got there,” he said.

Using RNA sequencing, they could see what neurotransmitters were being used, how the neurons were talking to each other, and how they had developed.

“The first thing that we did is use the neurotransmitters to divide them into big categories and then we could go into those categories and look for subtypes,” said Niell. Once they had a so-called “parts list” they moved to locating the parts within the visual system.

To map out where the different neurons were located in the brain, the team used RNA fluorescence in-situ hybridization. “We could take the molecular signature of one cell type, and then go basically paint that onto the optic lobe, and say, where are all of those?” explained Niell. This painting revealed distinct layers that are further divided into specific sub-layers of neurons.

“So that’s where things get interesting because there’s not quite a similar structure in our brain,” said Niell. “The closest we actually have is our retina.”

In both human and octopus eyes, light enters the pupil and is focused by the lens onto the retina, which sits at the back of they eye where photoreceptor cells process information. However, compared to octopuses, the human retina has extra layers of cells that process information before sending the signal onto the brain.

According to Niell, some people have compared the human retina to optical lobe of the octopus, the thinking being that the extra layers of processing in humans are analogous to the layers in the octopus’ brain. Niell said they now know this is incorrect. “That doesn’t seem to be the case, it seems like this really is a distinct organization of a visual system,” he added.

Interestingly, both mammalian and octopus brains use similar neurotransmitters and express similar developmental genes, but where and how the octopus brain was using them was completely different. For example, in mammals, dopamine is a neuromodulator involved with things like motivation. This doesn’t appear to be the case in octopus where the transmitter is being used in the optical lobe.

“We see some similarities, but then there’s always little twists, so we can’t directly map them onto each other,” said Niell. This reinforced just how different the construction of the octopus’ visual system is despite carrying out the same function as mammals.

“One thing we’re interested in is, even though they look different, and they’re using different neurotransmitters, maybe they’re doing similar types of computations,” said Niell.

Surprising way to grow a brain

One of the biggest initial surprises was the discovery of many immature neurons. “In retrospect, it makes sense,” said Niell, “because the octopus’ brain actually continues to grow throughout its lifetime.”

Another quirky feature of these cephalopods is lifelong brain growth and the speed at which it occurs — nearly doubling in size every two weeks. “So, if your brain is continuing to grow, you need to be adding new neurons and that means at some point, you have to have some immature neurons that are coming in and joining the circuit,” explained Niell.

While continual brain growth does occur in other species, such as some fish and birds, the way new neurons are incorporated into the circuit is different. Birds and fish add new cells on the edges of the visual system. In octopuses, said Niell, “it looked like these neurons are just filling in everywhere, which kind of makes it a little bit harder of a problem for the brain to solve.”

Adding new neurons to the edges shouldn’t disrupt existing pathways or functions but intermeshing and filling in new ones could. Niell used an analogy to explain, “Imagine a computer trying to work as you’re continually popping in new transistors all over the place.”

Understanding this process of neurogenesis may provide clues regarding neurodegenerative disease and healing from brain injuries.

The knowledge that a visual system can be designed in a previously unknown way is a tantalizing find. The team can now perform more detailed studies on what these neurons are doing, and again, compare them to mammalian vision.

“Even if the overt organization looks different, maybe the computations are similar,” said Niell, “that would allow us to find some of these shared computations, which might be the fundamental things all visual systems have to do.”

Beyond this basic work, understanding how the octopus does things we can’t may help improve technology, such as underwater imaging.

“Another example I like to give is artificial vision or AI,” said Niell. Right now, most AI visual systems doing things like facial recognition are based on things that resemble the vertebrate visual system.

“You can imagine designing other types of AI machine vision systems that are based on the octopus’ visual system,” he added. “That might have very different capabilities than AI that’s based on our visual system.”