Mapping the gas web of the Tarantula Nebula

New images of the Tarantula Nebula help us understand how intense star formation at its center impacts the rest of the nebula. 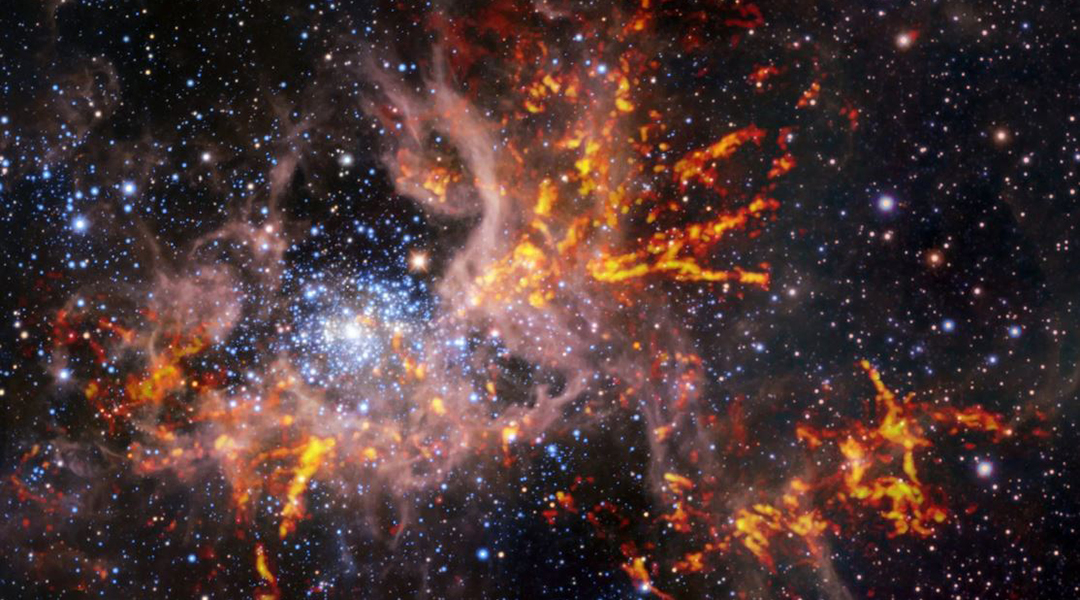 Astronomers have unveiled detailed observations of the Tarantula Nebula, one of the most active star-forming regions in the Local Group of galaxies, which consists of the Andromeda Galaxy, our own Milky Way, and the Triangulum Galaxy, along with 50 or so much-smaller dwarf galaxies.

Star formation occurring at the heart of the Tarantula Nebula has produced some of the most massive stars ever observed, with some more than 150 times the mass of our Sun. Tony Wong, professor of astronomy at the University of Illinois, was curious about how this population of massive stars might affect star formation in other parts of the nebula.

Since stars interact with their surroundings through the emission of particles, such as photons, this process, known as stellar feedback, might overwhelm the gravitational pull within the nebula’s surrounding gas cloud. This would cause the gas to disperse and, if the feedback was too strong, it may became too sparse, forever reducing or removing the nebula’s ability to form stars in the future.

To understand how the Tarantula Nebula is affected by stellar feedback, Wong and collaborators used the Atacama Large Millimetre Array (ALMA), located in the Chilean Andes, to produce high-resolution radio maps of its cold gas distribution.

They measured the emission of light from carbon monoxide (CO) gas. This material, if available in sufficient quantities, can collapse to form stars. With this data, they produced a map of the large, cold gas across the whole nebula and observed how the gas is influenced by the huge amounts of energy released by its stars.

The distribution of CO gas was found to be comprised of several prominent filaments stretching out from the nebula’s central star-forming region (see image). “These fragments may be the remains of once-larger clouds that have been shredded by the enormous energy being released by young and massive stars, a process dubbed feedback,” said Wong, in a statement.

The authors then took a closer look, investigating the gas’ structure within these filaments. They used code that scanned the images, looking for dense regions and found hundreds of CO gas clumps dense enough to potentially form stars. This demonstrates that star formation can still occur even in the presence of intense stellar feedback.

“We were expecting to find that parts of the cloud closest to the young massive stars would show the clearest signs of gravity being overwhelmed by feedback,” says Wong. “We found instead that gravity is still important in these feedback-exposed regions — at least for parts of the cloud that are sufficiently dense.”

The images are being presented today at the American Astronomical Society meeting and will also appear in a publication in The Astrophysical Journal.

Beyond the Tarantula’s web

These results can tell us about more than just the Tarantula Nebula. “What makes [the Tarantula Nebula] unique is that it is close enough for us to study in detail how stars are forming, and yet its properties are similar to those found in very distant galaxies, when the universe was young,” said Guido De Marchi, a co-author and scientist at the European Space Agency. “Thanks to [the Tarantula Nebula], we can study how stars used to form 10 billion years ago when most stars were born.”

Yet, there is more insight to be gained from the Tarantula Nebula. Wong concluded with some encouragement for others: “There is still much more to do with this fantastic data set, and we are releasing it publicly to encourage other researchers to conduct new investigations.”

Scientists identify alien planets that could be observing Earth
Dark matter could be composed of primordial black holes
Can bacteria survive in space?
Nobel Prizes 2019: Physics