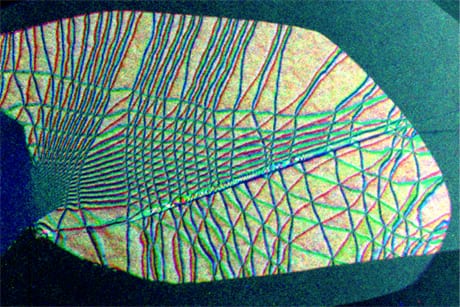 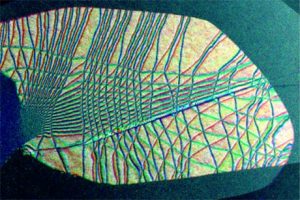 Just an atom thick, 200 times stronger than steel and a near-perfect conductor, graphene’s future in electronics is all but certain. But to make this carbon supermaterial useful, it needs to be a semiconductor – a material that can switch between insulating and conducting states, which forms the basis for all electronics today.

Combining experiment and theory, Cornell researchers have moved a step closer to making graphene a useful, controllable material. They showed that when grown in stacked layers, graphene produces some specific defects that influence its conductivity.

On the experiment side, a research group has imaged and analyzed the structure and behavior of graphene sheets stacked one on top of the other, called bilayer graphene. The group, publishing online June 24 in Proceedings of the National Academy of Sciences, includes Paul McEuen, the Goldwin Smith Professor of Physics and director of the Kavli Institute at Cornell for Nanoscale Science; David Muller, professor of applied and engineering physics and Kavli co-director; and Jiwoong Park, associate professor of chemistry and chemical biology and Kavli member.

They showed that instead of flat sheets of repeating carbon atoms arranged like chicken wire, when graphene grows layers, it ripples, like wall-to-wall carpet exceeding room dimensions. These ripples, called solitons, are like electrical highways that allow electrons to shoot from one end of the sheet to the other. The rest of the non-rippled graphene, when stacked, is semiconducting.

Previously, theorists had predicted that bilayer graphene would be uniformly semiconducting when stacked and staggered – the way a sheet of billiard balls would stack if the balls (atoms) were nestled in the in-between spaces. But the theory didn’t pan out, and the Cornell researchers now contend it is because of the solitons.

“People thought graphene was perfectly stacked everywhere, but in truth it has these funny structural solitons that give rise to electronic, one-dimensional channels,” McEuen said. “All these complexities were hiding.”

A separate research group led by Eun-Ah Kim, assistant professor of physics, published a paper the same week in Physical Review X that describes the mathematics and theory behind the electrical properties of the solitons and how they fit into the bilayer graphene picture that McEuen’s collaboration studied.