A novel class of reactive plasticizer can avoid the problem of migration of the additive from the polymer matrix.

Poly(vinyl chloride) (PVC), known to everyone as an inexpensive flooring material, after polyethylene and polypropylene, the world’s third-most widely produced synthetic polymer. Plasticizers are being used extensively to impart flexibility to normally brittle PVC. Phthalate esters of low molar mass compounds are generally first choice additives but have the disadvantage that they are easily released from the polymer matrix and are found in many environments, in domestic foods and wastes, and in animals and humans. The loss of plasticizers causes changes in the long-term properties of the material, as well as possible toxic and biological effects when the plasticizer is transferred to humans, a reason why these systems have been banned by the FDA for applications in the biomedical sector. 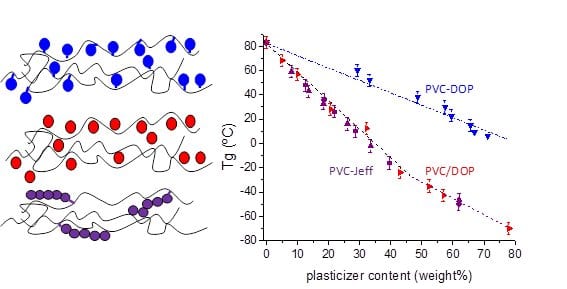 Oligomeric plasticizers (violet) that require few anchoring points to the polymer and exhibit optimized compatibility characteristics may be useful as equivalent, but non-migrating substitutes for phthalate based additives (di-2-ethylhexylphthalate, DOP – red).

Previous studies have shown that the covalent binding of phthalate plasticizers to the polymer chains is able to avoid any kind of migration. However, this strategy has shown to have an important limitation with respect to the plasticizer efficiency. This is due to the fact that covalent binding induces rigidity to those chain segments to which the additive is linked.

Helmut Reinecke and co-workers from the Institute of Polymer Science (ICTP-CSIC) in Madrid report that this disadvantage may be circumvented by using oligomeric polyether (PEO-PPO) based plasticizers. In this way it is possible to bind large amounts in weight of the additive using only very few anchoring sites, thus improving largely the plasticizing efficiency. In fact, the new systems are shown to be suitable for the preparation of plasticized PVC materials free of additive migration exhibiting adjustable physico-chemical properties, from highly flexible to semi-rigid. In particular, it is possible to achieve similar plasticization as in non-linked standard PVC/phthalate mixtures using equivalent quantities of plasticizer. This class of reactive plasticizer can be synthesized in an economical and ecological one-pot way and allows plasticized PVC for applications in the biomedical sector to be revisited.