A chemistry and engineering nano-solution that aims to safeguard Earth against climate change can be imagined metaphorically as a “Life Raft” that will sustain renewable energy systems and living systems “thriving and buoyant” over the next thousand years when fully deployed around the globe. 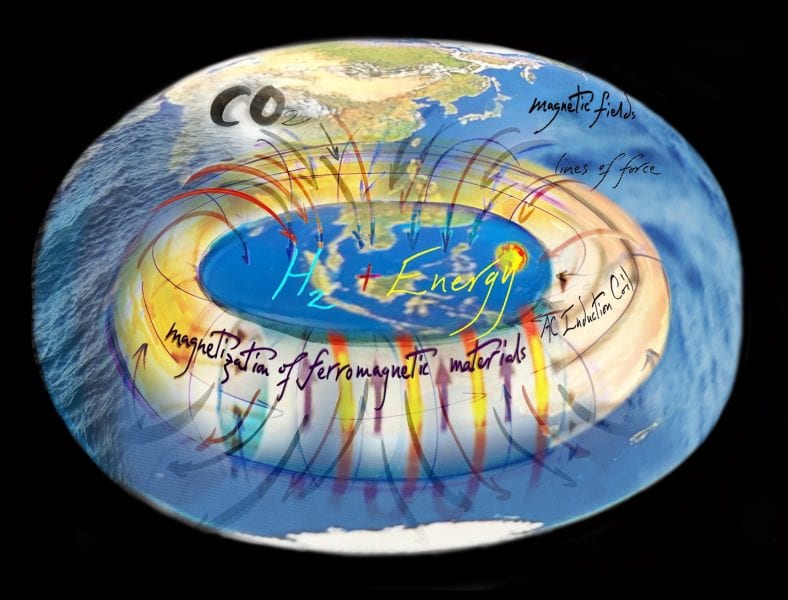 A chemistry and engineering nano-solution that aims to safeguard Earth against climate change can be imagined metaphorically as a “Life Raft” that will sustain renewable energy systems and living systems “thriving and buoyant” over the next thousand years when fully deployed around the globe. The conceptual “core” of this metaphorm is inspired by the electromagnetic principles of the induction coil with its capacity to convert renewable electrical energy to magnetic energy, which can ultimately be stored as chemical energy, by powering the heterogeneous catalytic conversion of CO2 + H2 to value-added chemicals and fuels, exemplified by CO, CH4, CH3OH, HCO2H or (CH3)2O. Graphic artwork courtesy of artist Todd Siler, www.artnanoinnovations.com

The heterogeneous catalytic conversion of gaseous CO2 into value-added chemicals and fuels, such as synthesis gas, methane, methanol, dimethyl ether or formic acid, requires a high surface area nanostructured material as the catalyst, hydrogen as the reducing agent, together with the input of considerable amounts of energy, because of the exceptionally high thermodynamic and kinetic stability of CO2. 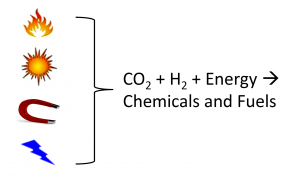 The energy required to drive these conversions, as illustrated graphically in Figure 1 can come in the form of thermal, solar or electrical energy, ideally from a renewable and abundant source. This strategy thereby provides a technologically attractive opportunity for storing excess renewable energy in the form of chemical energy, which can be subsequently used as a source of power for transportation, heating or electricity generation or as a synthon that can be integrated into the chemical and petrochemical industries’ supply chain.

Cognizant of the substantial amounts of CO2 emissions associated with the large-scale production of chemicals and fuels generated by fossil powered heterogeneous catalysis, it is interesting to note an emerging interest in photothermal heterogeneous catalytic hydrogenation of CO2 that exploits heat from the sun rather than heat from combusting fossil fuels, a concept presented in an earlier Opinion Editorial presented by me.

In this context, the underlying mechanism for the conversion of solar energy into thermal energy needed to drive these heterogeneous catalytic processes is based on different kinds of non-radiative relaxation processes that follow the absorption of solar photons in nanostructured materials. These include light-induced electron and phonon on-radiative relaxation processes, which can cause local heating of the nanostructured catalyst due to spatial confinement effects of electrons or phonons arising from its small size. Temperatures achieved in this way depend on the morphology and dimensions as well as the optoelectronic properties of the nanomaterial. Depending on the intensity and wavelength of the incident light, local temperatures can readily reach those commonly used in gas-phase heterogeneous catalytic processes, such as methanol or hydrocarbon production.

In fact, highly absorbing ultra-black nanostructured materials that make efficient use of the entire solar spectrum from infrared to ultra-violet wavelengths, are proving to be especially useful for driving heterogeneous catalytic hydrogenations of CO2 to value-added chemicals and fuels, as seen in the work recently published in Advanced Science, 2014, DOI:10.1002/advs.201400001.

Another approach receiving increasing attention for heterogeneous CO2 hydrogenation, the subject of this article, is magnetothermal catalysis using a nanostructured magnetic material, as reported in work very recently published in Angewandte Chemie International Edition. The method is founded upon the transformation of electromagnetic energy from an external high frequency alternating current field into thermal energy in a magnetic nanomaterial. The device to achieve this heating effect in a magnetic nanostructured catalyst is called an induction coil. 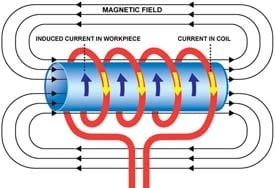 The electromagnetic principles underpinning the operation of the induction coil are illustrated in Figure 2. The coil is traditionally made of metal and is designed to heat an electrically conducting metallic or semiconducting material positioned within the confines of the coil. The method is based upon resistive I2R Joule heating of the material by eddy currents induced by the magnetic field associated with a high frequency alternating current passing through the coil. The extent that these eddy currents penetrate into the body of the material, known as the skin depth d, determine the Joule heating and depend on the frequency of the AC field w as well as the electrical conductivity s and magnetic permeability m of the material, according to the expression d = (2/wsm)0.5. The skin depth is normally greater than a micron for most magnetic conductors. Temperatures up to 1000° are quickly, precisely and reproducibly achievable by this non-contact induction heating method.

In the case of magnetic nanomaterials, whether they exhibit the properties of a single domain super-paramagnet or a multi-domain ferromagnetic, when subjected to an alternating electromagnetic field they undergo irreversible magnetization cycles. The process of magnetization reversal results in energy losses in the nanomaterial, which are manifest as local heating able to drive a thermal heterogeneous catalytic conversion.

To amplify, the origin of magnetothermal heating in multi-domain ferromagnetic nanomaterials is from hysteresis energy losses arising from magnetic domain displacement and rotation relaxation processes. The area of the magnetization hysteresis loop for one cycle corresponds to the energy loss Eh, while the power loss depends on the frequency f of the AC field Ehf. The loss of power increases with frequency until a saturation value, at which point the motion of the magnetic domains cannot keep up with AC field and the power loss decreases. Hysteretic heating will operate up to the Curie temperature of a ferromagnetic nanomaterial after which eddy currents afford Joule heating, providing resistivity is not too low and size is not to small. In the context of size, an interesting question is whether or not the skin effect and associated Joule heating has to be taken into account for an assembly of ferromagnetic nanomaterials. It is worth noting that laboratory scale induction heating usually operates in the frequency range 50 kHz to 10 MHz with magnetic field amplitudes of the order of 10-100 mT.

For smaller size superparamagnets comprised of a single magnetic domain, the hysteresis loss is negligible and magnetothermal heating instead arises from rotation dynamics of the single-domain magnetic moment within the nanomaterial. This loss is related to the energy required to overcome the magnetic anisotropy barrier KV between opposite orientations of the magnetic dipole, where K is the anisotropy constant and V is the volume of the nanomagnet.

The magnetothermal effect offers fast heating with high power transmission, both advantageous properties when driving the conversion of gaseous CO2 to chemicals and fuels with nanoscale magnetic catalysts.

The key to achieving high magnetothermal catalytic energy efficiency is to design and synthesize a magnetic nanomaterial that advantageously integrates high surface chemical reactivity with high magnetothermal heating efficiency. The latter metric is quantified in terms of the specific absorption rate (SAR) of electromagnetic energy measured in W/g and can be measured by calorimetry. It depends on a number of parameters including the size and shape, composition and structure dependence of the magnetic properties of the catalyst, catalyst support, co-catalyst, and combinations and assemblies thereof, Figure 3.

It will also depend upon the geometry and dimensions of the induction coil, the frequency and amplitude of the alternating field, and in the case of a continuous flow reactor, the reactor design, catalyst packing and reactants flow rate.

At this early stage of the research, the elemental compositions and classes of nanomagnetics that are considered interesting candidates for the heterogeneous magnetothermal hydrogenation of CO2 include magnetic metals and alloys selected with at least one component from the ferromagnetic group of transition elements Fe, Co and Ni and with rare earth elements Nd, Gd and Sm, as well as magnetic metal oxides, simple and complex, exemplified by chromium dioxide, magnetite, maghemite, iron oxyhydroxide, magnetic spinels and inverse spinels, perovskites and garnets. Other magnetic compositions based on solid-state metal hydrides, borides, carbides, silicides, sulfides and phosphides, and combinations thereof, might also prove interesting, providing they are able to survive the harsh conditions typically found in a heterogeneously catalysed CO2 hydrogenation process.

Inspired by these exciting developments, one might even consider taking the photothermal and magnetothermal approaches to an even higher level by searching for the “electro-magneto-photo-thermal” effect in nanostructured materials, which in principle can take advantage of all four renewable energy sources in one package to power a CO2 catalytic conversion reaction.

The opportunities for using these electromagnetic and optoelectronic effects in nanostructured materials to drive thermal heterogeneous catalysis processes applied to a wide range of chemical transformations are enormous. I anticipate many researchers will be magnetically attracted to this new strategy for discovering active and selective nanomaterials with the capacity to convert CO2 to chemicals and fuels.