A new in vivo strategy for displaying foreign polypeptides on magnetosomes is presented. 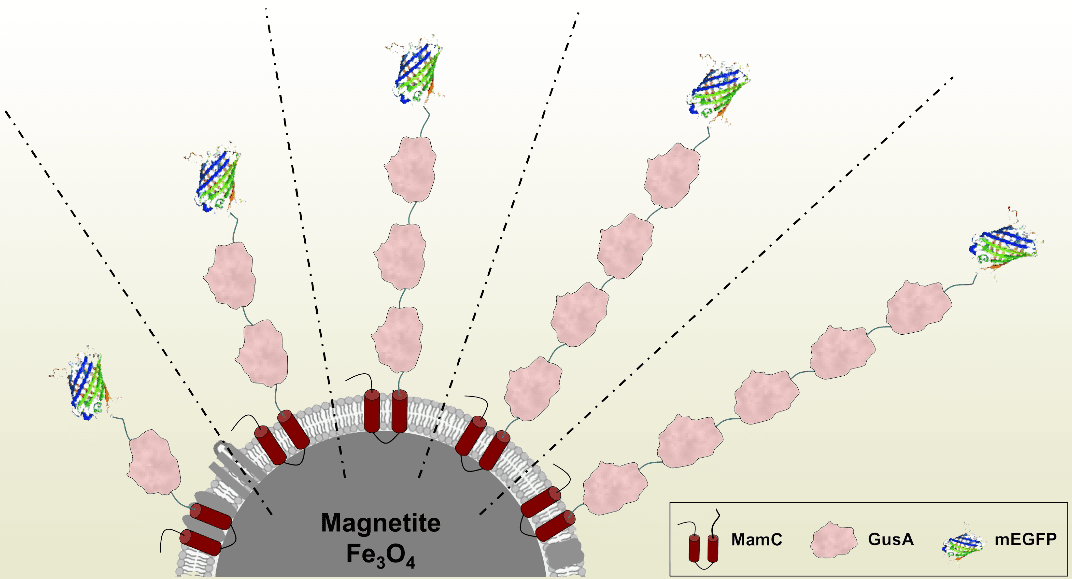 Functionalized magnetic nanoparticles with tailored properties are of great interest for many nanotechnological and biomedical uses, such as nanocarriers for magnetic drug targeting, for magnetic capturing of soluble analytes, magnetic hyperthermia, and as reporters for magnetic imaging techniques. Many applications require the addition of functional moieties to the particle surface, which is regularly done by various types of surface chemistry. However, both synthesis and decoration of the particle surface are still hard to control, often require harsh denaturating conditions and lack selectivity.

Magnetosomes synthesized by magnetotactic bacteria such as the alphaproteobacterium Magnetospirillum gryphiswaldense are natural magnetic nanoparticles which consist of a monocrystalline core of magnetite (Fe3O4) enveloped by a protein-containing phospholipid bilayer. They are synthesized in a highly regulated biomineralization process, and exhibit superior properties, such as high chemical purity and crystallinity, strong magnetization, and precise morphologies and uniform sizes. All these features as well as the composition of the enveloping membrane can be engineered by genetic means, making magnetosomes highly attractive for nanotechnological and biomedical applications. The latter would benefit from (multi-)functionalized particles (e.g. by enzyme proteins), with maximized protein-to-particle ratios. However, it remained unexplored how biological activity and stability of enzymes is affected by their magnetosome expression. 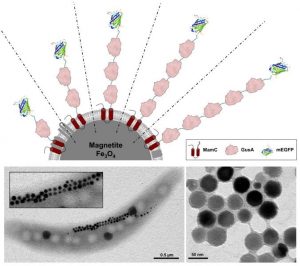 Schematic representation illustrating the expression of arrays of up to five copies of the glucuronidase GusA and mEGFP as fluorophore and additional translational reporter. More here.

In this study published in Advanced Biosystems, multifunctional nanoparticles were genetically engineered that display arrays of up to five monomers of the model enzyme glucuronidase GusA plus the additional fluorophore mEGFP.

The article highlights that genetic multiplication is a very powerful strategy for the generation of densely decorated, multifunctional nanoparticles, and provides a promising route for the display of other enzyme proteins and peptides more relevant for both biotechnological and biomedical applications.

In summary, an improved strategy is described for the generation of tailored core-shell related nanoparticles with several genetically encoded and tunable functionalities including magnetism, the presence of a biological envelope, fluorescence and catalytic activity.

Text and image kindly provided by the Authors.