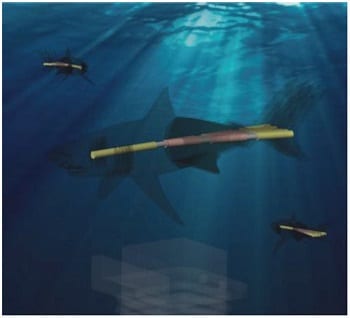 Micro- and nanorobots have a myriad of applications, including targeted drug delivery, manipulation and isolation of cells, and environmental remediation. In order to actuate such small robots, many different propulsion methods have been applied, including chemical reaction and external electrical, optical,ultrasonic, and magnetic stimuli. Magnetic propulsion has been widely used to power the micro- and nanorobots due to its non-invasive remote actuation and easy direction control. Such magnetic stimuli have been used successfully for actuating surface walkers, helical propellers, and flexible propellers. 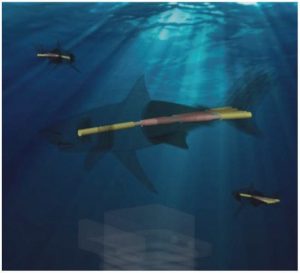 The swimming locomotion of fish, which is one of the most powerful swimming strategies of aquatic organisms, involves a complex interplay between a deformable body and induced flow in the surrounding fluid. While innovative robotic devices, inspired by physio-mechanical designs evolved in fish, have been created for underwater propulsion of large swimmers, scaling such powerful locomotion into micro-/nanoscale propulsion remains challenging. Researchers now have invented a highly efficient body-deformable biomimetic magnetic nanoswimmer that successfully emulates the fish’s propulsion. The new fish-like body-deformable multilink artificial nanoswimmer consists of one gold segment as the head, two nickel segments as the body and one gold segment as the caudal fin, with all segments connected by three flexible porous silver hinges. Such a multilink design offers a high order of structure flexibility undulatory locomotion. The powerful propulsion of the new nanofish demonstrates the possibility of scaling down highly-efficient macroscopic aquatic locomotion into the low-Reynolds number regime. Compared to most of the other artificial magnetic propellers, the present nanofish displays the highest dimensionless speed (up to ~0.6 body length per revolution), as well as on-demand navigation and speed modulation. This fuel-free fish-like deformable nanoswimmer is thus expected to advance rapidly towards practical biomedical applications.