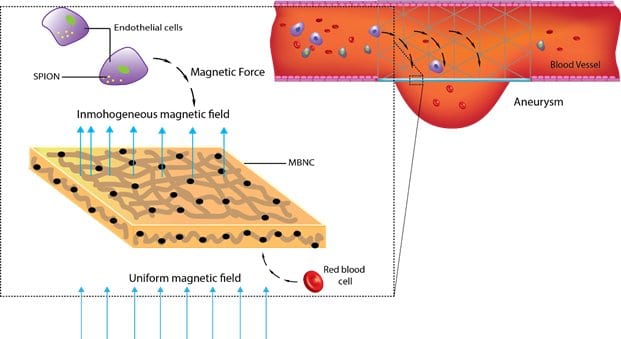 Cerebral aneurysms are defects on the wall in the primary artery of the brain, which are formed due in part to abnormal high hemodynamic stresses induced by traumatic brain injury amongst other reasons. A desirable treatment of cerebral aneurysms is the complete cut-off of the defect from the parent artery with minimum luminal obstruction. Even though different approaches have shown to exclude the defect from the parent artery, the main shortcomings remain the delayed reconstructive occlusion of the aneurysm, which occurs a period of weeks to months and open cranial surgery to clip the aneurysm shut with extremely high surgical risk to the patient. 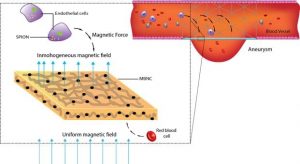 Jean Paul Allain from University of Illinois at Urbana Champaign and colleagues hypothesized designing a novel multi-functional biomaterial that would provide a focal magnetic attractive force in the local region near the aneurysm neck orifice. By synthesizing an inhomogeneous magnetic field a magnetic force could be designed to attract locally supplied magnetized endothelial cells and thus speed up re-endothelization across the aneurysm defect. Although, the aneurysmal neck is a hostile environment for tissue growth resulting from the blood’s shear stress that precludes cell adhesion and proliferation, the resilient natural hydrogel provides the multi-functionality desired for this complex in-situ tissue regeneration strategy. The authors reveal in their recent article in Macromolecular Bioscience how they used bacterial nanocellulose as starting material for the production of a magnetic hydrogel, which is named magnetic bacterial nanocellulose (MBNC). This magnetic material also satisfies important features such as biocompatibility, appropriate mechanical properties (e.g. tensile strength and compliance), and blood compatibility (non-thrombogenic).