Lunchtime! How Butterflies and Moths Discover their Food Sources 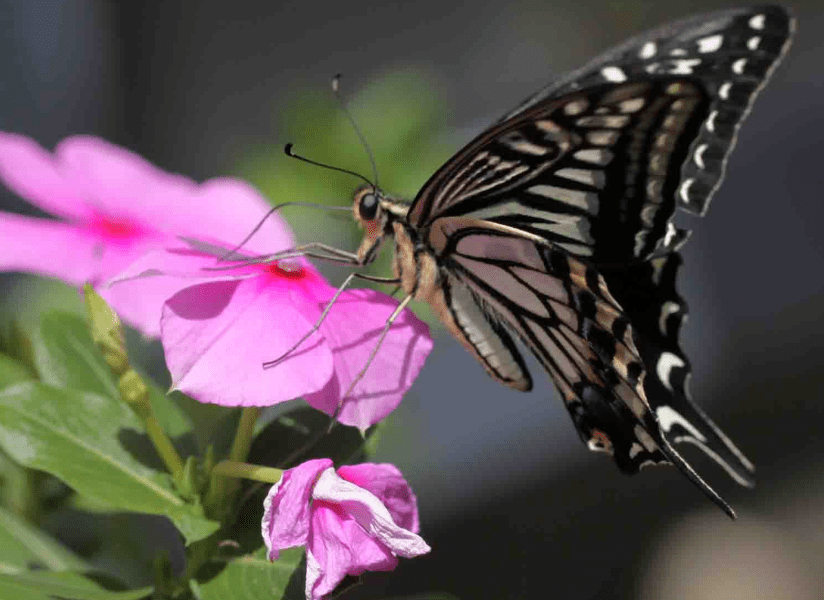 Have you ever wondered how butterflies are able to find their food sources, especially as they often show a preference for specific flowers? Kinoshita and colleagues address this question by analyzing findings from both day-active butterflies as well as diurnal and nocturnal moth species.

Butterflies have a highly developed sense of color. They even exhibit innate preferences for particular colors with many of them being attracted to blue and yellow. Interestingly, this preference may be different between males and females of the same species. Furthermore, it may also vary depending on the background color and on the choice of colors offered. When monarch butterflies, for example, are presented with six different colors, they show a preference for orange whereas they choose yellow in a test with only red, yellow and blue as choices. In addition to color, shape and pattern may also play a role in flower recognition, but this still needs further investigation.

It should be noted, however, that for most lepidopteran species there is no clear separation between visual and olfactory cues; it is rather the combination of both types of input that influences foraging behavior. It is assumed that the so-called ‘mushroom body’ in the brain is the site for processing and integration of this multisensory information. Future studies of the foraging behavior of lepidopteran species will hopefully not only shed more light on the role of the mushroom body, but also help to further our understanding of the co-evolution of flowers and flower-visiting insects.

With fewer disruptive studies, is science becoming an echo chamber?
Vaccinating the most vulnerable first may not have the greatest impact on COVID-19, new model sugges...
Can Microalgae Make Martians of Humankind?
MRI cancer therapy uses magnetic seeds to destroy tumors