Swiss researchers have discovered a promising approach to how we might produce batteries out of waste graphite and scrap metal.

Kostiantyn Kravchyk works in the group of Maksym Kovalenko. This research group is based at both ETH Zurich and in Empa’s Laboratory for Thin Films and Photovoltaics. The two researchers’ ambitious goal at is to make a battery out of the most common elements in the Earth’s crust – such as magnesium or aluminum.

These metals offer a high degree of safety, even if the anode is made of pure metal. This also offers the opportunity to assemble the batteries in a very simple and inexpensive way and to rapidly upscale the production.

In order to make such batteries run, the liquid electrolyte needs to consist of special ions that do not crystallize at room temperature – i.e. form a kind of melt. The metal ions move back and forth between the cathode and the anode in this cold melt, encased in a thick mantle of chloride ions. Alternatively, large but lightweight organic anions, which are metal-free, could be used.

But, where are these “thick” ions supposed to go when the battery is charged? What could be a suitable cathode material? By way of comparison: in lithium–ion batteries, the cathode is made of a metal oxide, which can easily absorb the small lithium cations during charging. However, this does not work for such large ions. In addition, these large anions have an opposite charge to the lithium cations.

To solve the problem, the researchers turned the principle of the lithium–ion battery upside down. In conventional Li–ion batteries, the anode is made of graphite. In Kovalenko’s battery, on contrary, the graphite is used as a cathode. The thick anions are deposited in-between the graphene layers. In Kovalenko’s battery, the anode is made of metal. 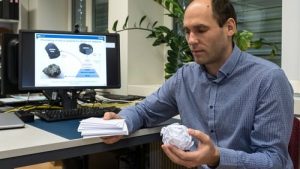 Kostiantyn Kravchyk explains, why kish graphite works so good: The edges of the graphite look like the edges of a bunch of paper. The ions can move in there easily. If the graphite layers are crunched, that won’t work so good. Image: Empa

Kravchyk made a remarkable discovery: he found that waste graphite produced in steel production, referred to as ”kish graphite”, makes for a great cathode material. Natural graphite also works equally well – if it is supplied in coarse flakes. Here, the graphite layers are open at the flakes’ edges and the thick anions are thus able to slip into the structure more easily.

The graphite cathode battery constructed from steel production “kish graphite” or raw, natural graphite flakes has the potential to become highly cost-effective. And if the first experiments are anything to go by, it is also long-lasting. For several months, a lab system survived thousands of charging and discharging cycles.

“The aluminum chloride–graphite cathode battery could last decades in everyday household use,” explains Kravchyk and adds “similar demonstrations, but further increased battery voltages, without compromising capacities, and of even lighter elements are on the way and will offer further increase in energy densities.”

A natural way of turning off the carbon dioxide tap, California style
Sand batteries that are dirt cheap
The significance and influence of personal experience when climate change comes home
How do we know if our adaptations to climate change are successful?