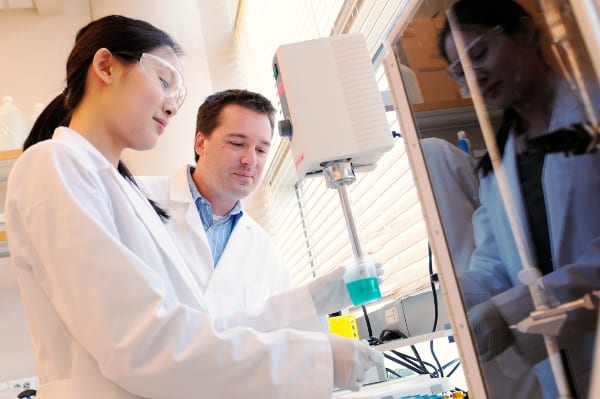 Before scientists and engineers can realize the dream of using stem cells to create replacements for worn out organs and battle damaged body parts, they’ll have to develop ways to grow complex three-dimensional structures in large volumes and at costs that won’t bankrupt health care systems.

The microparticle technique, which was demonstrated in pluripotent mouse embryonic cells, also offers better control over the kinetics of cell differentiation by delivering molecules that can either promote or inhibit the process. Based on research sponsored by the National Institutes of Health and the National Science Foundation, the developments were reported online July 1 in the journal Biomaterials and were presented at the 11th Annual International Society for Stem Cell Research meeting held in Boston June 12-15, 2013 .

“By trapping these growth factors within microparticle materials first, we are concentrating the signal they provide to the stem cells,” said Todd McDevitt, an associate professor in the Wallace H. Coulter Department of Biomedical Engineering at Georgia Tech and Emory University. “We can then put the microparticle materials physically inside the multicellular aggregate system that we use for differentiation of the stem cells. We have good evidence that this technique can work, and that we can use it to provide advantages in several different areas.”

The differentiation of stem cells is largely controlled by external cues, including morphogenic growth factors, in the three-dimensional environment that surrounds the cells. Most stem cell researchers currently deliver the growth factors into liquid solutions surrounding the stem cell cultures with a goal of creating homogenous cultures of cells. Delivering the growth factors from microparticles, however, provides better control of the spatial and temporal presentation of the molecules that govern the growth and differentiation of the stem cells, potentially allowing formation of heterogeneous structures formed from different cells.

Groups of stem cells stick together as they develop, forming multicellular aggregates that form spheroids as they grow. The researchers took advantage of that by driving microparticles containing growth factor BMP4 or noggin – which inhibits BMP4 signaling – into layers of stem cells using centrifugation. When the cell aggregates formed, the microparticles became trapped inside.

The researchers used confocal imaging and flow cytometry to observe the differentiation process and found that growth factors in the microparticles directed the cells toward mesoderm and ectoderm tissues just as they do in solution-based techniques. But because the BMP4 and noggin molecules were directly in contact with the cells, much less growth factor was needed to spur the differentiation – approximately 12 times less than what would be required by conventional solution-based techniques.

“One of the major advantages, in a practical sense, is that we are using much less growth factor,” said McDevitt, who is also director of the Stem Cell Engineering Center at Georgia Tech. “From a bioprocessing standpoint, a lot of the cost involved in making stem cell products is related to the cost of the molecules that must be added to make the stem cells differentiate.”

Beyond more focused signaling, the microparticles also provided a localized control not available through any other technique. That allowed the researchers to create spatial differences in the aggregates – a possible first step toward forming more complex structures with different tissue types such as vasculature and stromal cells.

“To build tissues, we need to be able to take stem cells and use them to make many different cell types which are grouped together in particular spatial patterns,” explained Andres M. Bratt-Leal, the paper’s first author and a former graduate student in McDevitt’s lab. “This spatial patterning is what gives tissues the ability to perform higher order functions.”

“We can see the microparticles had effects on one population that were different from the population that didn’t have the particles,” McDevitt said. “This may allow us to emulate aspects of how development occurs. We can ask questions about how tissues are naturally patterned. With this material incorporation, we have the ability to better control the environment in which these cells develop.”

The microparticles could also provide better control over the kinetics of cell differentiation. Including different amounts of molecules – one the growth factor and the other its antagonist – could vary the rate at which the stem cell differentiation proceeds.

While the research reported in this paper manipulated pluripotent mouse cells, the researchers have moved ahead in performing similar studies with human stem cells and achieved comparable types of results with the microparticle delivery approaches.

The developments not only help move stem cell technologies closer to the clinic, but also provide a new tool for research.

“Our findings will provide a significant new tool for tissue engineering, bioprocessing of stem cells and also for better studying early development processes such as axis formation in embryos,” said Bratt-Leal. “During development, particular tissues are formed by gradients of signaling molecules. We can now better mimic these signal gradients using our system.”

In addition to those already mentioned, the research team also included Anh H. Nguyen, Katy A. Hammersmith and Ankur Singh, all associated with Georgia Tech and Emory University when the research was conducted.