A litmus-type sensor system for the detection of volatile organic compounds is developed using a common office inkjet printer. 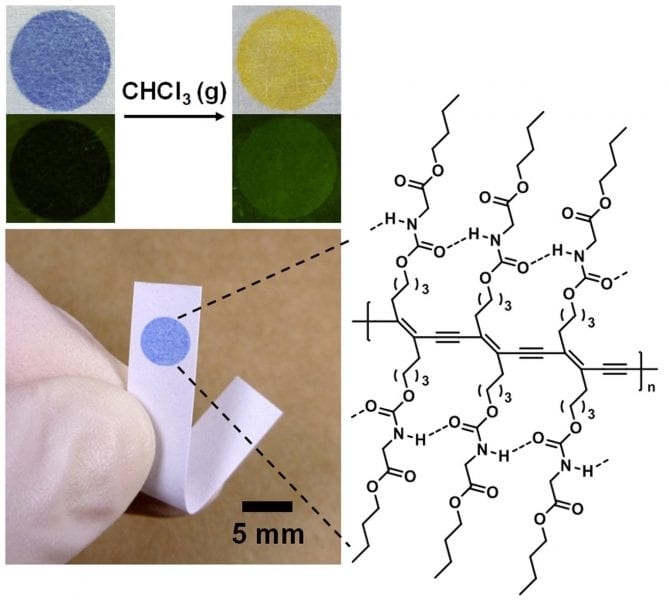 Paper-based sensor systems have gained significant attention recently. They are made from readily available materials, and are light-weight and flexible. Various stimulus-responsive organic, inorganic and biomolecules have been immobilized on paper substrates for the construction of efficient and disposable sensors. Polydiacetylenes (PDAs), a family of conjugated polymers, are especially interesting since the polymers undergo distinct color and fluorescence changes when their environment changes.

Combining the remarkable features of paper substrates and the sensory function of PDAs, Jong-Man Kim’s group at Hanyang University, Seoul, Korea has now developed a litmus-type volatile organic compound (VOC) sensor system. In order to fabricate the paper-based sensor strip, a microemulsion ink containing photopolymerizable diacetylene monomers was inkjet printed onto paper using a conventional inkjet office printer. UV irradiation of the printed image allowed fabrication of blue-colored PDAs on the paper. Exposure of the polymer immobilized strips to common organic solvents (methanol, toluene, chloroform etc.) resulted in distinguishable color and fluorescence changes (as can be seen in the video).

Unlike other vaporized solvents, the chloroform vapor-exposed image on the paper sensor strip undergoes a blue-to-red-to-yellow color transition accompanied by the generation of green fluorescence. After removal of the chloroform vapor, the yellow-colored image was reverted back to the red-colored state and disappearance of the green fluorescence was observed. These color/fluorescence transitions are fully reversible and can be repeated more than 300 times. A principle component analysis (PCA) plot of the color and fluorescence data enables the classification of tetrahydrofuran, methylene chloride, and chloroform without confusion.