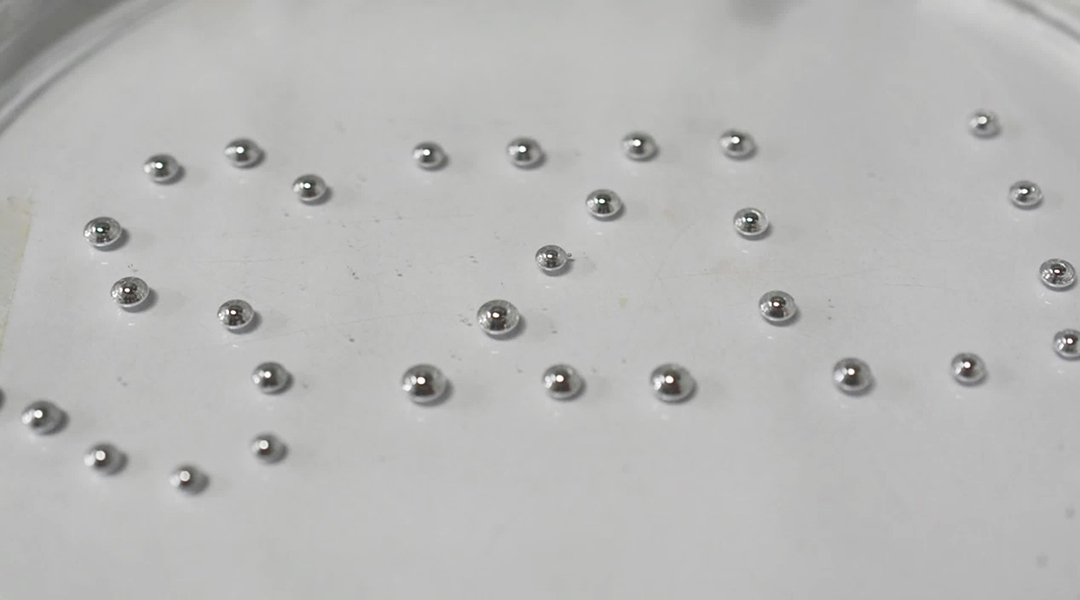 Combining the characteristics of a leech with the shape-shifting skills of a Terminator sounds like a recipe for disaster. But the sci-fi threat of the iconic deformable metal antagonist in Terminator 2 is still some way off — the robot was sent back in time from 2029 after all, so there’s plenty of time yet — and new research is finding productive uses for re-shapable liquid metal robots.

These aren’t robots in the walking, clanking, terminating sense, but tiny droplets of controllable material that can be wielded to our whims. Many attempts to use droplet-based robots have been somewhat limited by their tendency towards spherical shapes — put a single drop of water on a flat table and it’ll form a perfect little dome — and by their lack of electrical conductivity.

In a new approach, published in Advanced Intelligent Systems, a liquid metal droplet-based soft robot has been developed that can conduct electricity, re-shape in response to magnetic fields, and respond to infrared light.

In developing this most artificial of creations, the researchers looked at the movement of soft bodies in the natural world for inspiration. Leeches can extend, contract, curl, and bend in a flexible way in response to external stimuli. Mimicking this fluid motion is ideal for softly squirming through tight spaces without leaving a trail of destruction.

In the study, the researchers from Shenzhen University in China, created droplets that can perform reversible telescopic shape-shifting, bending, and movement in response to magnetic fields. Furthermore, the robots can split into separate parts and then re-join, raising the possibility for multi-tasking.

Once this elegant dance of motion and manipulation is complete, a change in temperature is enough to shift the droplets from liquid to solid, securing the pieces in place until any further alterations are needed. The researchers envision the robots being used as switches or for repairs in electrical circuits. With their electrical conductivity and capacity for remote control, they could be used in transient electronics, be recycled when no longer needed, or carry out connection repairs without creating disturbance in the rest of the circuit.

The liquid metal droplets are formed by mixing and grinding carbonyl iron particles and Galinstan, a room temperature liquid alloy of gallium, indium and tin. “The iron particles can be separated from the liquid metal droplets with a strong field larger than ~500 mT, and we assume that a thin oxide layer surrounding the iron particle protects it from alloying with gallium,” said Ben Wang, an assistant professor at the Shenzhen University and one of the authors of the study.

His colleague Stephan Handschuh‐Wang, an associate researcher, explains how the robots remain stable. “A thin layer of gallium oxide is spontaneously formed on the liquid metal droplet surface (either in water or in air), and endows the liquid metal patterns and droplets with mechanical stability. The gallium oxide layer is self-limiting, meaning a stable oxide film with a maximum natural film thickness is established because the diffusion of the metal toward the surface is impeded by the oxide layer.”

In a world of disposable technology littered with gadgets and machinery that becomes useless over time, the prospect of being able to remotely repair electrical circuits and reclaim and recycle core elements after use is tantalizing.

Inspiration from the natural world can lead to more sustainable innovation in electronics, which is a far cry from shapeshifting, world-ending Terminators.