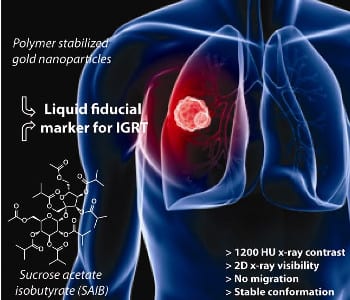 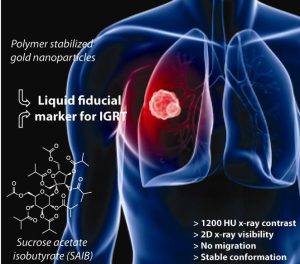 Radiation therapy is a mainstay in the treatment of many types of cancer, being applied either alone or in conjunction with other treatments (e.g. chemotherapy and/or surgery). Recently, image-guided radiotherapy has been developed to improve the precision of the applied radiation. This often involves using fiducial markers that can be inserted inside or near the target tumour, enabling the clinician to monitor the tumour position and deliver the radiation with greater precision.

Implant markers used at present are typically bulky, solid, metal-based materials, which have inherent drawbacks owing to the complicated implantation methods required. A Danish team led by Prof. Thomas Andresen recently reported in Advanced Healthcare Materials a promising alternative: a liquid-injectable marker based on polyethyleneglycol-coated gold nanoparticles embedded in a gelation matrix. While this material was found to be biocompatible and suitable for 3D X-ray imaging, insufficient contrast was achieved for 2D visualisation, which is often required, for example, for the real-time imaging of lung tumours.

In their latest contribution, Andresen’s team has developed a new injectable nanogel fiducial marker system that is sufficiently opaque to X-rays. The new system is based on a biodregradable sucrose derivative and poly(NIPAM)-coated gold nanoparticles. Because the nanoparticles are highly compatible with the sucrose-derived gel matrix, a high concentration of nanoparticles is able to be encapsulated, imbuing the gel with relatively high radio-opacity. The new system was successfully applied for 2D X-ray imaging of a clinical canine cancer patient. Moreover, high contrast was also achieved in conventional CT imaging. As a proof-of-concept, during the full course of radiation therapy (6 weeks) the marker was shown to be stable, retaining its 3D structure and not migrating from its initial position.

Although gold nanoparticles are currently not approved for human use due to a lack of knowledge of their toxicology, this work is a significant move forward as it presents the first high-contrast, easy-to-inject liquid fiducial marker for 2D image-guided radiotherapy. The gold nanoparticles may even enhance the efficiency of the radiotherapy by well-known scattering effects. As an indication of things to come, the authors suggest that it may be possible to incorporate drugs in the gel formulation giving it dual therapeutic and imaging functionalities.

Keep on smiling! A fluorescent mouthguard for healthier teeth
Graphene adjuvant improves efficacy of dendritic cell vaccines
Printing liquid metals: The next generation of wiring
On the implications of overlooking measurement effects in memristors