Lighting the path for cells: Growing neurons in 3D patterns

Researchers use "a guiding light" to direct the 3D growth of nerve tissue with a high degree of precision. 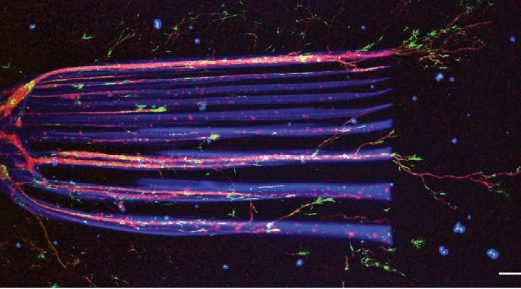 A revolution in regenerative medicine is unfolding with light being used to control living systems rather than just visualize them. Controlling living cells embedded in three-dimensional gels has led to break-through new technologies in tissue engineering and biomaterials research. Now, in a recent study published in Advanced Materials, a research team from ETH Zurich has developed a means of guiding nerve cell growth through the precise placement of signaling cells, called morphogens, in a 3D hydrogel scaffold.

Morphogens control tissue development by guiding important biological processes to establish the position of specialized cell types within a tissue. They are involved in countless important developmental processes, such as the wiring of the brain.

A long sought-after application in tissue engineering has been growth factor-guided tissue growth (or morphogenesis), which has the potential to re-grow damaged tissue. But for this to be viable, morphogens need to be carefully distributed and guided so that growth can be controlled in a desired area or direction. According to Marcy Zenobi-Wong, professor at ETH Zürich and one of the study’s lead authors, this has now been made possible.

The new approach relies on a technique called two-photon patterning (2PP), which uses a small photon beam to “draw” detailed shapes and pathways in a hydrogel using a signaling protein called nerve growth factor (NGF). This new technique uses a one-step process that avoids lengthy incubations and procedures that threaten the integrity of fragile cells, such as NGF. The key was improving the photon beam’s precision.

The team began by selectively “photocaging” specific groups on molecules within the hydrogel, using protecting groups that fall off when they are exposed to the two-photon beam. When the protecting groups are removed, this triggers a chemical reaction that anchors NGF to the hydrogel. “We carefully optimized the design of the photosensitive hydrogel so that the signal molecules attach only in the areas exposed to the laser — and nowhere else,” said Nicolas Broguiere of ETH.

Next, the team created “paintings” or impressions of morphogens at specific points in the hydrogel with millimeter detail — roughly the size of a nerve fiber. The neurons were then observed through a microscope to follow the mapped-out pattern written with the new 2PP process, “effectively guiding them using their own biochemical language”, said Broguiere.

Zenobi-Wong and Broguiere believe their innovation also offers potential benefits for medicine and in understanding the complex role signaling molecules play in tissue development and regeneration. “[But] I don’t want to give the impression that we’re ready to start treating patients with this method,” Zenobi-Wong says, “in the future, a refined version of our approach could help show neurons the right path directly in the body, thereby improving recovery from neural injuries.”