A new generation of enzyme-responsive HPMA copolymer-drug conjugates employing a enzyme-sensitive oligopeptide linker was developed. Fluorescence resonance energy transfer (FRET) was applied to investigate the enzyme-responsive performance in both cells and animals. 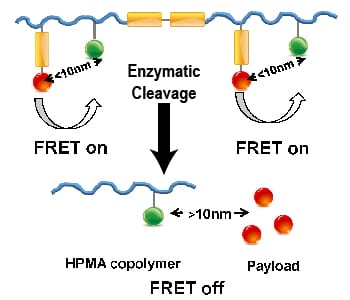 Over the past few decades, the concept of polymer-based drug delivery systems was developed and demonstrated superior properties over small molecule drugs. For example, N-(2-hydroxypropyl)-methacrylamide (HPMA) copolymer conjugates containing doxorubicin (DOX) were the first synthetic polymer-based anticancer conjugates to enter clinical trials. Kopeček and co-workers from the University of Utah developed a new generation of enzyme-responsive HPMA copolymer-drug conjugates employing a cathepsin B-sensitive oligopeptide linker that is not only incorporated into the side chains for drug attachment/release, but also inserted into the polymer backbone for degradation. The enzyme cathepsin B is overexpressed in a variety of cancer cells, such as melanoma, breast, ovarian, lung, stomach, and colon tumors. In this design, the enzyme-responsive linker is stable during transport but cleavable by cathepsin B inside the target cancer cells. Therefore, this new generation of enzyme-responsive backbone degradable carriers is able to release drugs in cancer cells that express a high level of cathepsin B. This design can enhance the tumor-to-non-tumor drug-release ratio.

In their study, Fluorescence resonance energy transfer (FRET) was applied to investigate the enzyme-responsive performance of HPMA copolymer-based drug delivery system in both cells and animals. FRET is a process in which energy is transferred from a fluorophore serving as a donor, to another chromophore or acceptor by long-range dipole-dipole coupling. Over the past decade, FRET imaging has been proven to be an extremely useful tool to visualize protein-protein interactions and protein conformational changes with high spatial resolution in microscopy. Here, this technique was employed for the development of drug delivery systems. The FRET pair (donor Cy5 and acceptor Cy7) was incorporated into the new delivery system. Upon exposure to the enzyme cathepsin B, the linker is cleaved,  leading to the separation of the fluorophore pair and to loss of the FRET signal.

The enzyme-responsive drug release of copolymer-drug conjugates was visualized at the cell, tissue and whole-body levels. The imaging results demonstrated that high expression of cathepsin B in tumor cells could induce a rapid release of drugs from conjugates and thereby mediate a relatively high concentration of active free drug inside the tumor cells. Consequently, the new generation of HPMA copolymer-drug conjugates could kill the target cancer cells more efficiently while reducing toxicity to normal tissues.

Taken together, the work presented by the Kopeček group provides a deeper insight into the function-mechanism relationship of this new drug delivery system. The information will enhance the understanding of the behavior of enzyme-responsive polymer carriers and help to shape the design of highly efficient delivery systems with decreased adverse effects.