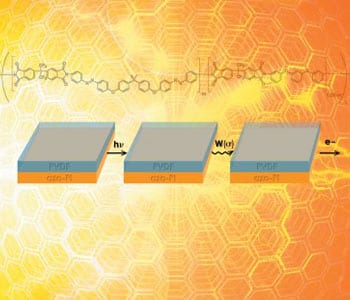 Despite its abundance on earth, solar energy only provides a minor contribution to human’s energy supply. The direct use of solar energy and its transduction to electricity are still a great challenge many researchers are facing today. In particular, the development of energy harvesting devices with flexibility and lightweight are of tremendous interest.

With that end in view, a research team lead by Timothy J. White investigated photoinduced piezoelectric effects on composites prepared from photoresponsive polymeric materials laminated with the piezoelectric polymer polyvinylidene fluoride (PVDF). In their article, which is part of the “Best of Macros” series, these laminate composites are shown to generate time-sequenced electric signals of up to 6 mV upon irradiation with visible light.

The aim of White’s study was to exploit the photomechanical response of amorphous azobenzene-functionalized polyimides to subject piezoelectric PVDF to striction to generate an electric signal, which is known as photopiezoelectric effect. It could be demonstrated that photopiezoelectric conversion strongly depends on the photomechanical properties of the investigated polyimides. A series of photoresponsive copolymers was studied, with the concentration of azobenzene being altered. Cantilever reflection experiments revealed an increase in photomechanical response with azobenzene content upon irradiation with visible light. Notably, the relaxation behavior of the investigated polymers varied, while the samples with the highest azobenzene content showed no sign of stress retention.

This article is part of the special Best of Macros – Edition 2015 issue, and is now free to read at http://www.best-of-macros.de!