This Letter presents a study of the elastic constants of InN by means of Brillouin scattering. The sagittal and azimuthal dependence of the surface acoustic wave velocity have been experimentally determined on c – and m -face epilayers. The authors analyse these results in comparison with simulations based on the Green’s function formalism, and they propose a complete set of elastic constants for c -face and m -face wurtzite InN. 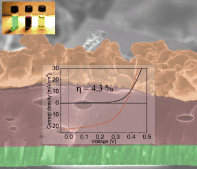 Cu2ZnSnSe4 (CZTSe) thin film solar cells are fabricated by a simple, non-vacuum deposition of metal salts dissolved in non-hazardous solvents followed by selenization in Se atmosphere. Despite a residual carbon-rich layer between the back contact and the CZTSe absorber layer, solar cells with up to 4.28% conversion efficiency are obtained for Cu-poor and Zn-rich CZTSe absorbers. A frequently reported problem, the loss of tin, is investigated with respect to the influence of the selenization conditions such as substrate temperature and selenium partial pressure. EDX point measurements directly confirm that the remaining decomposed layer consists of a mixture of binary ZnSe and Cu2–xSe phases for too high substrate temperature and deficient Se supply.

Lee et al. report on the fabrication and electrical comparison between flexible tunnel field-effect transistors (TFETs) and MOSFETs on plastic substrates from device to circuit performance by use of fully CMOS-compatible silicon nanowires (SiNWs) as the channel material. The SiNW TFETs exhibit an ION/IOFF ratio of ∼105, which is about an order of magnitude lower than that of their MOSFET counterparts. The SiNW complementary TFET inverter shows ultralow DC power consumption, about 3–4 orders of magnitude lower than the SiNW CMOS inverter. Due to the different pros and cons for each of these devices, the authors’ top–down approach opens up the opportunity to integrate SiNW TFETs and MOSFETs on one plastic substrate for flexible hybrid integrated circuits, where both high-performance and low-power functionality are required. 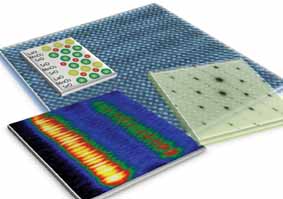 La2/3Sr4/3MnO4 (LSMO) can exhibit anisotropic electrical transport properties in bulk crystals. Artificial layered heterostructures offer the possibility of confining magnetic moments to two dimensional sheets and increasing the anisotropy compared to bulk crystals. A LSMO cation ordered superlattice grown by molecular beam epitaxy showed a large enhancement of magnetization in the out-of-plane direction upon cooling the sample below 110 K. Atomic-resolution structural analysis of the sample shows the formation of nanopatches of incoherency to the underlying SrTiO3 substrate when cooling the sample below 150 K. This structural transition observed only in superlattices leads to an enhancement of magnetic moment in the out-of-plane direction.

Compact surface structures for the efficient excitation of surface plasmon-polaritons

The ability to couple volume propagating optical waves into surface plasmon-polaritons (SPPs) in small and confined spaces is crucial for the development of plasmonic circuits. Based on rigorous electromagnetic methods, de la Cruz et al. study the excitation of SPPs through surface structures of nanometric dimensions, illuminated by focused beams. The authors consider steps, grooves and angled steps, and calculate efficiency maps for these structures as functions of the parameters that define them. They also study the efficiency associated with sequences of a small number of grooves and find that such compact structures can couple about 45% of the light into a directional SPP.

Hogan et al. present a joint experimental–theoretical study of the reflectance anisotropy of clean and gold-covered Si(557), a vicinal surface of Si(111) upon which gold forms quasi-1D chains parallel to the steps. By means of first-principles calculations, the authors analyse the close relationship between the various surface structural motifs and the optical properties. Good agreement is found between experimental and computed spectra of single-step models of both clean and Au-adsorbed surfaces. Spectral fingerprints of monoatomic gold chains and silicon step edges are identified. The role of spin–orbit coupling on the surface optical properties is examined, and found to have little effect. 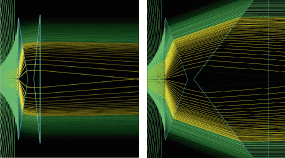 In this article, the dispersion relations of two self-propagating modes in an arbitrary anisotropic uniaxial metamaterial are derived. The light refraction and reflection characteristics of a flat interface between this anisotropic metamaterial and an isotropic one are studied. The authors confirm that having a negative perpendicular component of the tensorial optical response, is an equivalent condition of having negative refraction of the corresponding mode. They also find conditions for the existence of a critical refraction angle as well as the Brewster angle and conditions for constructing materials with constant reflectance, which can be in particular non-reflective. The authors use these results to propose the design of a diffuse-light collimator with a high efficiency and simple geometry.