Eggs constitute an important part of human food consumption. The 2015 yield of eggs worldwide was about 80 million tons. During 2017 in the European media, reports of huge amounts of eggs being contaminated by pesticides were widespread.

Securing the freshness of eggs is very important. In industrialized chicken breeding, 7–8% of the total number of eggs remain unfertilized in spite of fertilization. If the unfertilized eggs are not removed in time, not only are resources consumed, but also embryonic mortality could be impacted.

Optical spectroscopy techniques have a number of applications in many fields, including analytical chemistry, environmental monitoring and medical diagnosis. The GASMAS technique, a high-sensitivity and noninvasive method of optical spectroscopy, relies on the large difference in linewidth between optical absorption by free molecules and those strongly perturbed in condensed matter. Solids or liquids exhibit broad structures with typical widths of many tens of nanometers, while molecules in gas phase have narrow absorption lines with a certain width.

A team of researchers from the Center of Optical and Electromagnetic Research in China studied the free oxygen and water vapor contents in eggs and on temporal changes. The information aimed to indicate the degree of freshness of unfertilized eggs and to distinguish unfertilized eggs from fertilized eggs. 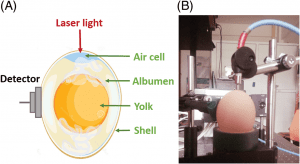 (A) Schematic figure of the interior of a hen egg. (B) Photograph of an egg under study, with the light-injection fiber at the top and the detector to the left.

The measurements showed that the oxygen as well as the water vapor signal change with time in a characteristic way for hen eggs.

In contrast, fertilized eggs showed a different behavior, with a decreasing oxygen signal while the water vapor signal is steadily increasing; an increase in the effective path length through the gas, similarly as for oxygen in the case of unfertilized eggs.

ROS and the Making of the Modern Cell
Understanding human aging with the help of a worm
Heating up the debate: New findings in protocell evolution
A “time-accelerated computational microscope” provides biologists with powerful insights