LARP1 on TOP of Ribosome Production

Ribosome production is a considerable energy investment for the cell—rRNAs and ribosomal proteins (RPs) are among the most abundant classes of RNAs and proteins—and their production must, therefore, be synchronized temporally and stoichiometrically to ensure efficient ribosome assembly. 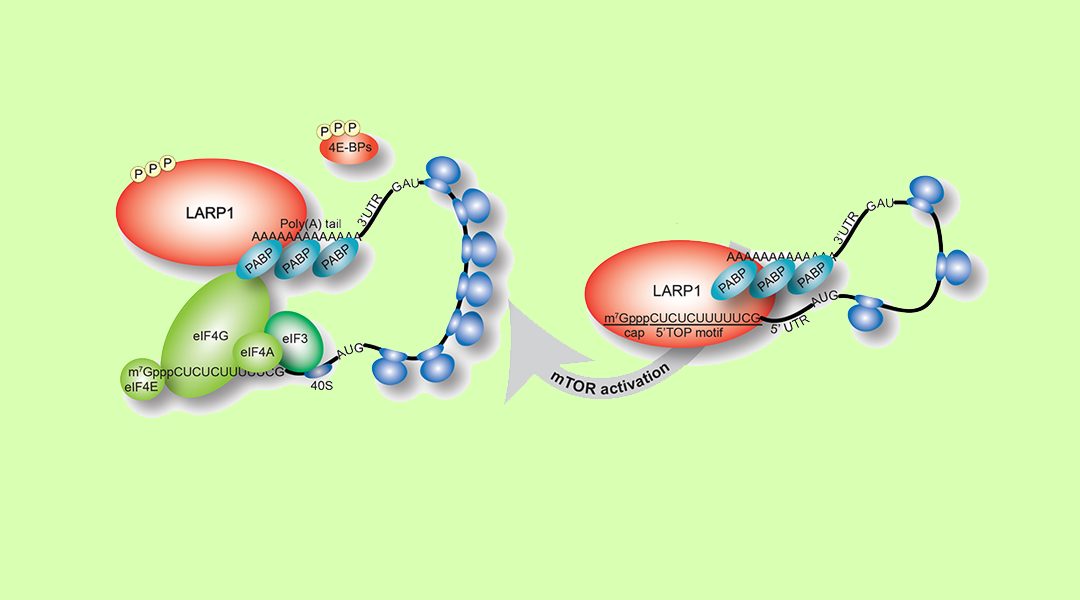 At the heart of cellular growth and proliferation rests the ribosome, an ancient multi-subunit RNA-protein hybrid molecular machine that performs one of the most fundamental cellular processes: decoding messenger RNA into protein. Ribosomes account for the bulk of the protein and the RNA content in eukaryotic cells. Eukaryotic cells must therefore devote a significant portion of their energy to synthesizing the various components of the ribosome.

Ribosome production is a highly regulated process to ensure that the number of ribosomes meet the demands for de novo protein synthesis in the cell. Each and every one of the eukaryotic ribosomal components–of which there are 80 ribosomal proteins (RPs) and 4 ribosomal RNAs (rRNAs)–is generated in a precise temporal and stoichiometric manner. This regulation is accomplished via a motif at the very 5’ end of the messenger RNAs (mRNAs) that encode the ribosomal proteins (RPs). This cis-regulatory RNA motif – also found in mRNAs encoding a number of accessory translation components, such as some translation factors and RNA binding proteins – is called the 5’TOP motif, short for 5’-terminal oligopyrimidine motif because it contains an uninterrupted sequence of pyrimidine nucleotides at the very beginning of the transcript; mRNAs containing the 5’TOP motif are called TOP mRNAs. The 5’TOP motif is essential for the coordinated translation of the ribosomal proteins, a process that is orchestrated by the mammalian target of rapamycin complex 1 (mTORC1) signaling pathway. 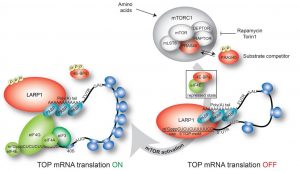 Recently the La-related protein 1 (LARP1) as a target of mTORC1 and a key trans-acting factor that represses TOP mRNA translation was identified (Fonseca et al., 2015) by directly recognizing the 5’TOP motif and the adjacent m7Gppp cap moiety (Lahr et al., 2017). These findings have been confirmed independently by another research group (Philippe et al., 2017). Together, these studies reveal the mechanism by which LARP1 represses TOP mRNA translation.

A Tail of Two Pathways: Regulation of mRNA 3’ Ends During Cellular Stress
Understanding human aging with the help of a worm
Fossils provide new insights into the evolution of bones
New device refines scientists' ability to sort and process human cells